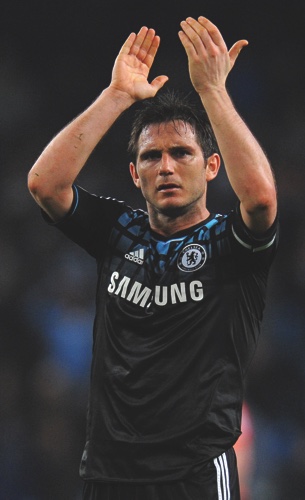 Major League Soccer expected the alliance between Manchester City and the New York Yankees to “elevate the league to new heights.”
MLS Commissioner Don Garber’s forecast at the 2013 launch now seems extremely optimistic and premature.
Any lift to MLS’ domestic standing or global credibility is being eroded by the uncertainty and lack of clarity over the status of New York City FC midfielder Frank Lampard and his prolonged stay in England.
More than five months after Lampard was paraded in Manhattan, the 36-year-old midfielder is integral to the City squad — the one in England. And when the MLS expansion franchise plays its first competitive game in March, the former Chelsea star will be on the other side of the Atlantic helping City defend its Premier League title.
Just when the new team is trying to gain fans’ trust and loyalty, they are revolting. Without even a result to complain about yet, some supporters want season ticket refunds.
How did it come to this? It depends on who you listen to.
NYCFC’S website seemed clear on July 24: “New York City FC signs Frank Lampard to a Designated Player contract … a two-year contract which starts August 1st.” Fans of a team without 11 players were urged to buy Lampard jerseys and tickets for the 2015 season.
Lampard then went on the YES Network — part owned by the New York Yankees, an NYCFC minority owner — to stress he joined MLS because he couldn’t play against Chelsea after 13 years in west London.
“I didn’t want to play anywhere else in England because I had been so affiliated with one club,” Lampard said on July 27. “So it made sense for me to move.”
By Aug. 6, it didn’t. City confirmed what had been anticipated, tweeting: “FRANK LAMPARD: Midfielder joins #mcfc on loan.”
Later in England, Lampard explained the move: “I got the call to come back here.”
MLS now says that Lampard was in fact was signed last July by City Football Group, the umbrella company for the portfolio of clubs owned by Sheikh Mansour in Manchester, Melbourne and New York, to play in MLS in 2015 and 2016. The intention, MLS confirmed, was always for Lampard join up with Man City until the end of 2014 before joining NYCFC, although he was expected back by the start of 2015.
“He was scheduled to train with the (Manchester) team and possibly play in some matches that would help him prepare for the start of the New York City FC season,” Garber said Sunday in an MLS statement to The Associated Press.
Although City described Lampard’s arrival as a “loan” on Aug. 6, that online announcement has been removed and the term “loan” not used by the club again, although Lampard has referenced “loan” in media interviews.
City has not responded to detailed questions about Lampard’s contractual status. But deep in City’s 2013-14 accounts is a declaration that the “football registrations … acquired” since May 31 was Lampard’s.
Announcing Lampard would not be returning for the MLS season opener, City said on Dec. 31 that Lampard’s “contract” had been extended.
It’s an uncomfortable situation for MLS. Lampard stretching out his career in England beyond his planned farewell shows that the Premier League outranks NYCFC’s debut for the Abu Dhabi ownership.
“When he initially joined Manchester City, none of us envisioned Frank would play such a prominent role in the club’s season,” Garber said.
But with seven goals, Lampard has defied his years by showing he can still cut it at the highest level. Now Lampard is staying at City until May, and his MLS career is due to finally start halfway through the regular season in July.
“This is an extremely unusual set of circumstances, as Frank has become a one of the most important players in Manchester City’s season — scoring critical goals to put them in a tie for first place in the Premier League,” Garber said.
But it has created an American backlash, highlighted by the responses to NYCFC tweeting Lampard’s latest City goal on Jan. 1. Even NYCFC’s website, in newly-posted comments below the July signing announcement, includes accusations fans were misled.
Alexis Lalas, the former Los Angeles player turned Fox Sports commentator, characterized Lampard’s prolonged stay in Manchester as: “The mother ship has spoken.”
Cynics have suggested that the establishment of a portfolio of clubs is a mechanism to help City comply with UEFA Financial Fair Play rules (which the club denies). Originally intended to curb debt, FFP instead targets losses and restricts even wealthy owners like Sheikh Mansour from unrestricted investment in European clubs, thus City’s need to show it is generating cash.
But MLS embraces the injection of wealth from Abu Dhabi.
“I have had numerous discussions with ownership,” Garber said. “New York City FC is working hard at signing additional players for the club’s inaugural season.”
But Lampard’s contractual confusion validates perceptions that MLS is where stars to go into semi-retirement for a final pay day.
Steven Gerrard is leaving Liverpool for MLS later this year because the 34-year-old captain is no longer guaranteed playing time.
Only when players like Gerrard and Lampard come to the U.S. in their prime — and resist the chance to jump back to Europe — will MLS have come of age. Rob Harris , Sports Writer, London, AP