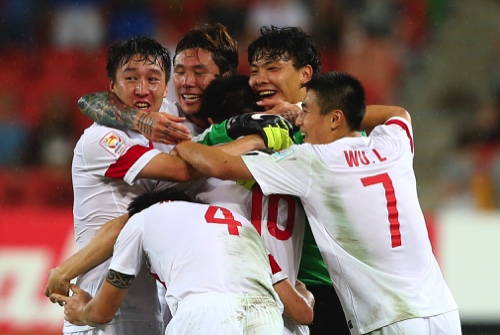 The China team celebrate with China’s Sun Ke center, after scoring a goal during the AFC Asia Cup soccer match between China and Uzbekistan in Brisbane, Australia

China coach Alain Perrin was thinking about uncorking some champagne as his players celebrated with raucous singing and high-fives after clinching a spot in the Asian Cup quarterfinals.
Wu Xi and Sun Ke scored second-half goals to propel China to a 2-1 comeback win over 2011 semifinalist Uzbekistan yesterday, ensuring top spot in Group B and a Jan. 22 quarterfinal match against either Australia or South Korea.
There’s still the matter of a remaining group match against winless North Korea on Sunday in Canberra, but with wins over Saudi Arabia and Uzbekistan already, Perrin decided it was OK to celebrate China’s first run to the knockout stage since it hosted the continental tournament in 2004.
Perrin said he’d open two bottles of good champagne back at the team hotel, adding that the coaching and staff had celebrated the opening win and now he’d invite the players.
“We played a very beautiful match,” the Frenchman said. “Now we can move to the knockout stage in the first ranking of the group. It’s fantastic.”
Australia and South Korea, each with six points from two wins, will meet on Saturday to determine top spot in Group A. Uzbekistan and Saudi Arabia will play in Melbourne on Sunday to decide which team goes through from Group B with China. Both teams have three points from wins over North Korea.
The North Koreans are already out of contention following the 4-1 loss to the Saudis in Melbourne, where a small but vocal group chanted the name of Kim Jong Un during the match.
Ryang Yong Gi gave North Korea the lead in the 11th minute when he swooped on a failed clearance from Saudi goalkeeper Waleed Abdullah — his country’s first goal in the Asian Cup since 1992 — but Naif Hazazi equalized before halftime and Mohammed Al Sahlawi scored twice in as many minutes to make it 3-1 in the 54th. Nawaf Al Abid added the fourth goal after Ri Yong Jik was sent off in the 77th for an intentional handball.
“I’m happy we won the game and also we had a good performance,” Saudi Arabia coach Cosmin Olaroiu said. “Now we have to forget it quickly to prepare for the game against Uzbekistan.”
After weathering China’s early attacking raids, Uzbekistan seized its first real opportunity when Odil Ahmedov’s strike from 25 yards deflected off Wu and looped inside the far past. Uzbekistan appeared to be in control until holes opened up in the defense after halftime.
Wu made amends when he equalized 10 minutes into the second half and Sun, who went on in the 66th, made an angled run from the left two minutes later and struck from the edge of the area.
Uzbekistan coach Mirdjalal Kasimov said his squad needed to regroup quickly ahead of the last group match, and suggested changes were possible after he started with the same 11 for consecutive matches.
Iran and United Arab Emirates have three points each and will be aiming to qualify from Group C with wins on Thursday. Iran takes on Gulf Cup champion Qatar in Sydney and the UAE plays Bahrain in Canberra. John Pye, Sports Writer, Brisbane, AP