Football | Asian Cup : Host Australia and champion S Korea play today before clash against each other 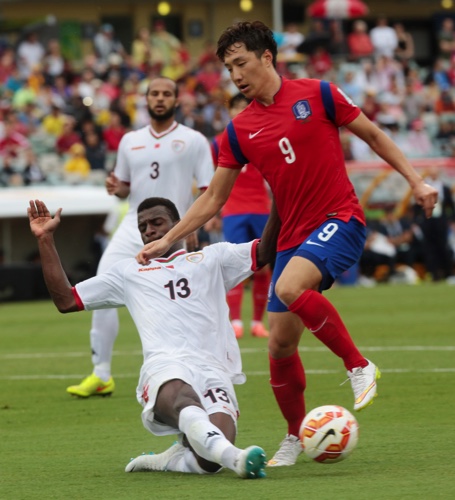 South Korea’s Cho Young Cheol, right, and Oman’s Abdul Sallam Al Mukhaini compete for the ball during the first round soccer match of the AFC Asia Cup between South Korea and Oman in Canberra, Australia

The second set of group matches kicks off today at the Asian Cup, with host Australia against Oman at Sydney and two-time champion South Korea playing Kuwait in Canberra.
Here’s some things to watch in the Group A matches:
Australia v Oman, 5pm. Australia opened the Asian Cup last Friday with a resounding 4-1 win over Kuwait in Melbourne, a confidence-boosting start to the tournament for the hosts after conceding a surprising early goal.
Socceroos coach Ange Postecoglou will be forced into changes against Oman, though, with skipper Mile Jedinak struggling with an injured left ankle. Veteran Tim Cahill, Australia’s leading international goalscorer, will lead the team in Jedinak’s absence.
Oman had a 1-0 loss to South Korea in its opening match in Canberra, narrowly missing a stoppage-time equalizer that would have earned the team a valuable point.
Postecoglou said he’d heed the lessons learned at the World Cup in Brazil — when the Socceroos took Chile and Netherlands right to the wire before a lopsided loss to 2010 champion Spain in their last group match — and rotate his players in the preliminaries rather than going into later matches with a fatigued starting lineup. Australia and South Korea meet in the last group match on Saturday.
“We’ve learnt pretty clearly at the World Cup by the third game we were pretty spent as a group because we relied on a core group of players,” Postecoglou said. “We don’t want to fall into the same trap. We want to do well in all three games and (Oman) is a very, very important game for us.”
Postecoglou said Oman made it tough for South Korea, and he expected his lineup to confront a similar bustling, counter-attacking game.
“While (South) Korea dominated the chances and possession you saw right up until the last minute the game was in the balance,” Postecoglou said. “They are always a tough opponent for us.”
Center back Trent Sainsbury said three points against Oman would give Australia every chance of progressing.
“We got off to a great start against Kuwait, but this is equally as important, if not more so,” he said. “If we get that three points, then we’re through. It’s a massive game for Australia. We’re at home, we’ve got a point to prove.”
Kuwait v South Korea (3pm). Swansea City midfielder Ki Sung-Yueng’s is expected to be central to South Korea’s push for back-to-back group wins.
Coach Uli Stielike is demanding improvement from his South Korea lineup, which dominated possession and had considerably more chances against Oman but had to settle for a 1-0 win, courtesy of Cho Young-cheol’s goal in first-half stoppage time. Oman didn’t get a shot on goal until substitute Amad Al Hosni’s header in injury hit the crossbar.
Stielike said the two-time champions were under intense pressure in South Korea to improve on the semifinals appearances at the last two Asian Cups. He said he saw positive signs in the second-half against Oman.
“I prefer a hard, tough match in our opening game so we can learn from our mistakes and get better and better in the tournament,” he said. “I feel that’s better than winning 5-0 and then everyone thinks you can win the Cup and you get smaller and smaller instead.”
There was some doubt over the fitness of defender Kim Chang-soo and Bolton Wanderers’ midfielder Lee Chung-yong, who were both injured during the opening match.
“Normally the players know one day before the game the starting lineup (but) in this case it’s not like this,” Stielike said. “Not because I don’t want to give it to them, but at the moment we don’t know what players are ready.”
And despite Kuwait’s lopsided opening loss to 2011 finalist Australia, Stielike said the team had South Korea’s full attention.
“I don’t consider Kuwait a weak side,” he added. “I know some people believe South Korea will have an easy time against Kuwait, but I will tell my players to be careful.”
Kuwait went into the tournament opener with limited preparation under new coach Nabil Maaloul, who is hoping to have attacking options Bader Al Mutawa and Yousef Naser fit and ready to start.
Team spokesman Nawaf Al Enezi said the players had put the loss to Australia behind them.
“Against Australia we played well, and created a lot of chances, and the players’ sprit was high,” he said. “We know the Korean style, and I hope we can play with the style that (Maaloul) wants and get a good result.” AP