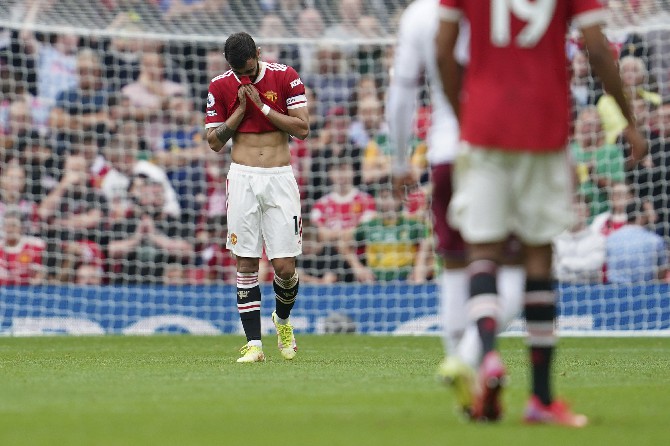 Bruno Fernandes missed an injury-time penalty as teammate Cristiano Ronaldo looked on in Manchester United’s 1-0 home loss to Aston Villa in the Premier League yesterday (Macau time).
Villa defender Kortney Hause was the hero for the visitors after he flicked a header past goalkeeper David De Gea off a corner in the 88th minute for his team’s first victory over United since 2009.
But Hause was then whistled for a handball to set up the dramatic spot kick as United tried to rescue a point at Old Trafford.
Fernandes, who had converted a penalty in all three of his prior Premier League appearances against Villa, adjusted the ball as Ronaldo stood nearby and then blasted it high over the crossbar.
“Bruno is very strong mentally, normally, and unfortunately today it just didn’t go in,” United manager Ole Gunnar Solskjaer told club media in postgame comments.
Solskjaer said Villa players “crowded Bruno” at the penalty spot before the key miss, but he had stronger criticism for the officiating on Hause’s goal. He said Villa forward Ollie Watkins was “clearly” offside.
“It’s offsides. As Hause is heading it, Watkins is actually touching David, so he’s impeding with him. I can’t see the consistency anywhere in this VAR and decision-making,” Solskjaer said. “Definitely VAR has gone wrong again.”
United amassed 28 shots but just four were on target as it failed to score in a home Premier League game for the first time in 16 games.
It was United’s first loss of the Premier League season and second overall after a League Cup defeat in midweek. The team has 13 points after six games.
United defenders Harry Maguire and Luke Shaw came off injured during the game as the team looks ahead to a Champions League match at home on Wednesday against Spanish team Villarreal. They’ll have scans before decisions are made about their availability for Wednesday, Solskjaer said.
Maguire and midfielder Paul Pogba came close for United just before halftime. Maguire was given space at the far post on a Fernandes free kick but his powerful header was saved by goalkeeper Emiliano Martinez. Soon after, Pogba’s header was just wide of the left post.
Villa’s first-half opportunities were even better. Matt Targett just needed a simple touch into an open goal from Matty Cash’s low cross to the far post, but he skied it over the crossbar in the 16th minute.
Watkins was then gifted the ball just inside the area after De Gea was forced to poke away an awkward back pass from Maguire in the 22nd. He shot it directly at De Gea for an easy save.
Villa hadn’t beaten United since December 2009, also at Old Trafford. The Birmingham squad has 10 points from six games and plays at Tottenham next Sunday in its third consecutive away game in all competitions.
“I might have a couple of beers tonight,” Villa manager Dean Smith told club media. “We don’t play until next Sunday now, so the lads can go and have a beer as well.” MDT/AP