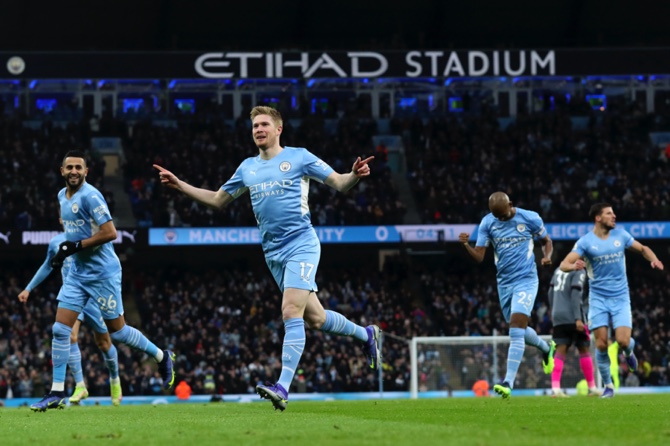 Coronavirus postponements aside, 28 goals in the Premier League’s six Boxing Day games provided a heavy dose of drama even without changing the complexion of the title race.

Even Manchester City, coasting at 4-0 after 25 minutes, managed to shake things up with a 10-minute second-half implosion to end up delivering a nine-goal thriller. The 6-3 win over Leicester left the defending champions six points in front.

“It was a roller coaster, a typical Boxing Day with a lot of goals,” City manager Pep Guardiola said. “For everyone it was an entertaining game.”

Second-place Liverpool does have a game in hand on City after the COVID-19 outbreak at Leeds meant that was one of three games postponed on Sunday.

And Chelsea is now level on points with Liverpool after coming from behind to beat Aston Villa 3-1. Arsenal is six points further back but in high-scoring form, routing last-place Norwich 5-0.

Arsenal’s grip on fourth isn’t so secure because Tottenham, which beat Crystal Palace 3-0, is six points adrift but with three games in hand after coronavirus and snow postponements this month.

Like Villa manager Steven Gerrard, Palace counterpart Patrick Vieira began isolating this weekend after a positive test. Palace failed to get its match at Tottenham called off but the Premier League board on Sunday did approve two postponements for Tuesday.

Leeds, which was due to host Villa, and Wolverhampton, which was to play at Arsenal, were deemed to lack enough players to fulfil the fixtures due to COVID-19 outbreaks.

Romelu Lukaku hadn’t scored in the Premier League since the home game against Villa. A trip to Villa ended the drought that’s coincided with injuries and a coronavirus recovery.

Lukaku was brought off the bench at halftime with the game tied at 1-1 after Reece James’ own-goal was canceled out by Jorginho from a penalty for Chelsea.

Lukaku took 11 minutes to find the net after glancing in from Callum Hudson-Odoi’s cross. A foul by Ezri Konsa to cut out Lukaku’s run then led to another penalty that Jorginho converted in stoppage time.

Lucas Moura scored one and set up goals for Harry Kane and Son Heung-min. Wilfried Zaha was sent off in the 37th when Palace was already trailing 2-0 after flinging his arms at Davinson Sanchez having already been booked.