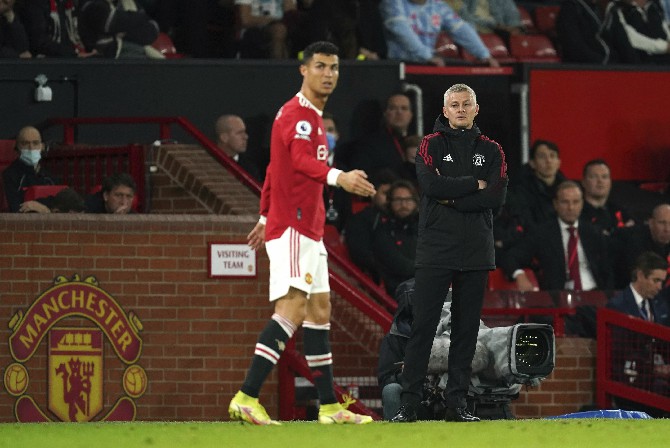 Of all Ole Gunnar Solskjaer’s miserable moments as Manchester United manager, losing 5-0 to Liverpool felt the lowest.
Especially when it came at Old Trafford against United’s greatest rival in the season when the team should be challenging for the title after so much more spending.
“This is the worst feeling,” Solskjaer said. “You feel rock bottom.”
Maybe all that is keeping Solskjaer in the job is the lack of chants aimed at him by United’s fans. There were enough of those being directed his way by the visiting Liverpool fans, gloating as the goals flowed from the fifth minute.
The rout was begun by Naby Keïta and the porous United defense allowed Diogo Jota to score again in the 13th minute. Mohamed Salah picked up the scoring to net for a 10th consecutive game for Liverpool, with two before halftime. The forward’s hat trick was completed five minutes into the second half.
“We have conceded too many goals, too many easy goals and that’s a concern,” Solskjaer said. “I am still thinking about tomorrow’s work, I can’t say now I have felt any worse than this.”
Not even after losing to Tottenham 6-1 here last October. Nine games into the season, the record 20-time English champions are already seven points behind Liverpool in second place with Chelsea a further point away in the lead.
United looks no closer to winning a first Premier League title since 2013. Even Jose Mourinho delivered the Europa League in 2017. His successor, Solskjaer, lost his only final in last season’s Europa League but was still handed a new contract in July through 2024.
“It’s not easy to say something apart from it’s the darkest day I’ve had leading these players and we weren’t good enough, individually and as a team,” Solskjaer said. “You can’t give a team like Liverpool those chances, unfortunately we did. The whole performance wasn’t good enough, that’s for sure. We’ve created openings, they’ve had chances and they’ve been clinical. We didn’t take our chances early on and the third goal is the one that decided the game.”
Although United finished second last season, Manchester City was 12 points in front for a fifth title in a decade.
“I do believe in myself. I do believe I’m getting close to where I want with the club,” Solskjaer said. “Just the results lately haven’t been good enough.”
Next up for United is a trip to Tottenham on Saturday. Nuno Espirito Santo’s side remains a point and place ahead of United after losing 1-0 to West Ham on Sunday when Michail Antonio got ahead of marker Harry Kane to score from a corner in the 72nd minute.
In Sunday’s other game, Youri Tielemans and James Maddison scored to give Leicester a 2-1 victory at Brentford.
Liverpool remains the league’s last unbeaten team as it looks to regain the Premier League trophy from Manchester City, which is a point behind.
The scale of Liverpool’s success at United is highlighted by Salah being the first opposition player to score a Premier League hat trick at Old Trafford.
“As long as the team keep winning, I’m more than happy,” Salah said. “I’m always trying to give assists. The first one I could go alone but I gave it to Naby, so I think I’m trying always to give my best for the team to win, which is the most important thing.” ROB HARRIS, MANCHESTER, MDT/AP