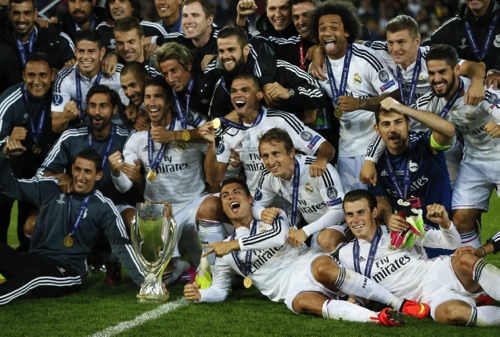 Moving on from a frustrating World Cup, Cristiano Ronaldo began the new season as the last one ended for Real Madrid — with goals and a trophy.
The Portugal forward netted both goals as the European champions convincingly overcame Europa League winner Sevilla with a 2-0 victory to collect the UEFA Super Cup yesterday (Macau time).
Ronaldo swept the ball in at the far post in the 30th minute after racing onto Gareth Bale’s cross, and the world player of the year powered in another four minutes into the second half after being setup by Karim Benzema.
“I didn’t feel any pain — I felt pretty good,” said Ronaldo, who scored just once in three World Cup games after arriving in Brazil hampered by a left leg injury. “I felt happy to help the team win the trophy … we played better, with more intensity.”
Madrid only collected two pieces of silverware last season, but the Copa del Rey triumph was following by ending a 12-year wait to claim a 10th European Cup.
Victory in Tuesday’s all-Spanish showpiece game captured the first of a possible six trophies for Madrid this season — a task helped by summer additions that ensured the value of the starting lineup at the Cardiff City Stadium exceeded $600 million.
Madrid moved swiftly to sign up the revelation of the World Cup, top-scoring Colombia playmaker James Rodriguez from Monaco for $108 million, along with Germany midfielder Toni Kroos from Bayern Munich for around $40 million.
Madrid, with their extra dynamism, unnerved Sevilla from the start, even if their less potent opponents did produce the first threatening shot of the game when Vitolo’s close-range effort was batted away by Iker Casillas.
“We were missing something and weren’t as aggressive as we could have been,” Sevillacoach Unai Emery said through a translator.
Many locals had snapped up tickets to see Bale playing in his home city for the first time in the white of Real Madrid. The $130-million Cardiff boy, who made such a devastating impact in his first season in the Spanish capital, just couldn’t delight them with a goal.
Although his bursts of pace unsettled Sevilla, a tame early shot landed on the roof of the net and a shot from Rodriguez’s fine cross was blocked in a crowded penalty area.
Bale started on the right with Ronaldo on the opposite flank, but a quick switch helpedReal outwit Sevilla to go in front. Ronaldo instigated the move on the halfway line, knocking the ball across to Rodriguez, who released Bale down the left. The rapid advance was completed by Bale sending in pinpoint cross into the path of Ronaldo to slide in past Fernando Navarro and poke the ball over the line.
“We’ve shown last season that we both created goals for each other, scored a lot of goals and we’re enjoying playing together,” Bale said of Ronaldo. “Obviously we can still improve together and create a good partnership.”
After being in complete control of the first half, it took just four minutes into the second half for Madrid with Ronaldo once again starting the move that led to the goal after the Spanish capital club broke down the left.
World Cup winner Kroos knocked the ball forward for Benzema before it was rolled back for Ronaldo to lash a powerful shot through the fingertips of Beto. Ronaldo’s double earned him the player of the match award, which was presented by Alex Ferguson, the manager who nurtured his talent at Manchester United.
“He was the coach who taught me many things,” the 29-year-old Ronaldo said. “So I appreciate him giving me the trophy.”
For Rodriguez, all that was missing was a goal to cap his debut, and it nearly came in the 68th when a left-footed strike was only kept out by Beto’s one-handed save.
Tougher matches will come, but a second trophy can be collected — the domestic Super Cup against Atletico Madrid — before the task of taking the league title off its neighbor begins. AP

A pitch invader waving a Palestinian flag briefly held up the UEFA Super Cup match.
The man appeared on the pitch in the closing stages of the showpiece fixture at the Cardiff City Stadium, and was taken away by stewards. European champion Real Madrid lifted the cup after winning 2-0.
Pro-Palestinian activism has been growing in Britain during the ongoing conflict between the Israeli military and Hamas militants in the Gaza Strip.