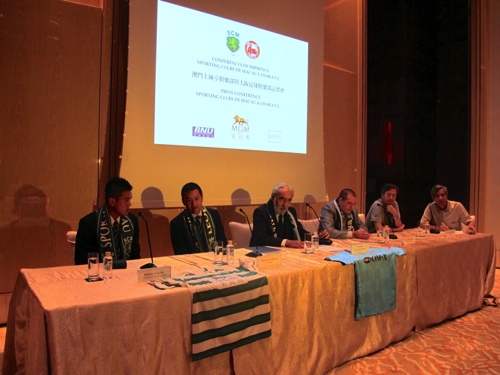 The Sporting Club of Macau and Japan’s Osaka F.C. have signed a partnership featuring football transfer opportunities for both sides.
Sporting Club of Macau’s president, António Conceição Junior, said that the partnership makes transferring players between Macau and Japan possible. “Local players who join Sporting might have the opportunity to play in Japan. Equally, players from Osaka will be playing here,” he said in a press conference held yesterday.
According to Mr Conceição Junior, partnering with a Japanese football club will benefit local players, who can travel to Japan and see how football has evolved there. “If Macau players go to Japan, they will realize how football has progressed and how Macau can do the same (…) it’s a challenge for Macau’s players,” he added.
Osaka F.C. President Mr Masato Yoshizawa said that his club wishes to be known beyond Japan’s borders, having already partnered with other football clubs in Brazil, Portugal and Turkey. Macau now presents itself as a doorstep, allowing the club to be better known across Asia.
António Conceição Junior stressed that they are particularly proud of the partnership, since Osaka F.C. took the initiative to directly contact Sporting Club of Macau. By partnering, Osaka F.C. seeks to work toward helping both teams grow, its president assured.
They are also looking to give Japanese players an opportunity to learn both Portuguese and Chinese. “There’s a noble goal behind this partnership, as Japanese [citizens] usually do not speak [many] foreign languages. So in addition to football training, they would also have the opportunity to learn Portuguese and Chinese,” said António Conceição Junior.
Osaka F.C.’s president, Masato Yoshizawa, stated that they have chosen to partner with a Macau club, as it is a place with a long tradition of football. “It is a football culture that still needs to grow, but it isn’t too different from football played in other places.” Furthermore, he said that because Macau is close to Japan, it makes it easier to send players here.
Regarding funding, António Conceição Junior stressed that players interested to come to Macau from Japan usually have sponsors, therefore Sporting would not have to fund the arrangement. He added that Sporting would be a doorstep for them into other football clubs as well.
The partnership will not be implemented immediately, but António Conceição Junior stressed that Sporting is committed to kicking off football training programs within the year.
Osaka F.C is a Japanese football club playing in the regional Kansai Soccer League. Sporting Club of Macau was promoted to Macau’s first division this year.