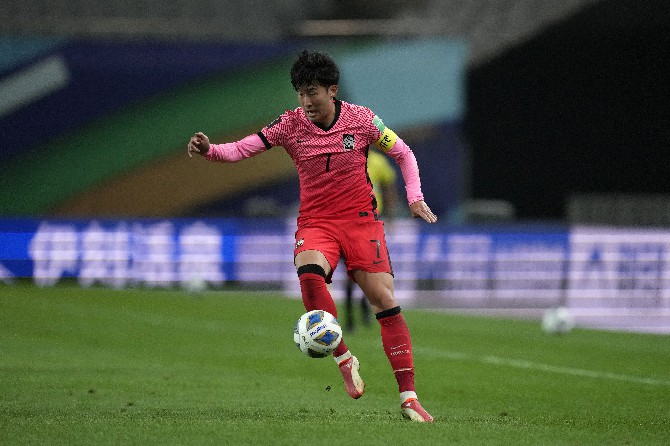 Japan’s shocking loss to Oman and South Korea’s scoreless draw with Iraq to open the third round of Asian World Cup qualifying has increased the pressure on the likes of Kyogo Furuhashi and Son Heung-min to replicate their excellent European club form in the international arena.
Japan, Asia’s highest-ranked team at No. 24 in the world, lost 1-0 at home to 79th-ranked Oman last Thursday to end a streak of eight consecutive wins in World Cup qualifying games.
South Korea, aiming for a 10th successive World Cup appearance, needs to rebound from its laborious draw against Iraq when it meets Lebanon on Tuesday.
Son, who signed a four-year extension to his Tottenham Hotspur contract in July, has rarely reproduced his glittering Premier League form when appearing for the national team.
He struggled under the close attention from the defense-minded Iraqis in Seoul last week.
Son played four days earlier in London, scoring the only goal in Tottenham’s 1-0 win over Watford, and the cramped schedule took a toll.
“It is obviously difficult to play in Korea only a couple of days after flying in from Europe,” he said. “I have lacked sleep because of the time zone change, but I’ll try to prepare for the next one as well as I can.”
South Korea coach Paulo Bento said while Asian defenders may focus on Son, it was important that his team didn’t depend entirely on their star forward.
“Concentrating on one player isn’t the best way for our team,” Bento said. “We need to find the collective solution. We should watch the game and check what we didn’t do so well, instead of analyzing just one player.”
Elsewhere in the group, Iraq and Syria, which lost 1-0 to Iran, have to play their home games on foreign soil because of security concerns. Iraq will face Iran in Doha, Qatar and Syria will host the United Arab Emirates in Amman, Jordan.
In Group B, Japan has plenty to work on against China following a deserved loss to Oman.
Celtic winger Furuhashi went on as a substitute against Oman but Japan still couldn’t find the net before conceding late.
“There are many aspects we need to address, but we must first redeem ourselves from this loss,” Japan coach Hajime Moriyasu said. “While reflecting on the match, we hope to build a positive vibe heading into our next match against China.”
The game will take place in Qatar because of travel restrictions and mandatory quarantine for entry into China, which lost its opening game 3-0 to Australia.
Australia coach Graham Arnold said his team was confident as it headed to Hanoi to face Vietnam, which opened with a 3-1 loss to Saudi Arabia.
“I was very proud of the performance of the players considering we only had 1 1/2 training sessions from when we got together but I can just see so much improvement in our team,” Arnold said. “I do believe we will get better and better as we play more and more games together.”
Arnold’s squad is having to play its scheduled home games on the road because of strict quarantine rules for anyone entering Australia. That was also the case for most of the second round of Asian qualifying, but didn’t stop the Australians finishing atop their group.
Among the other games today the Oman squad, which returned from Japan to a rapturous welcome at Muscat International Airport, will take on Saudi Arabia. JOHN DUERDEN, SEOUL, MDT/AP