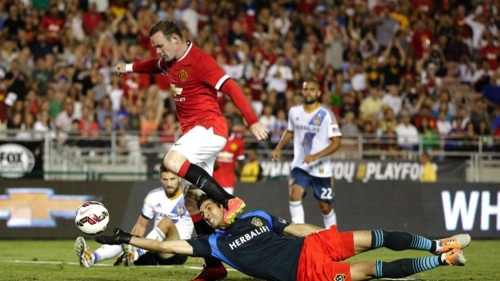 Manchester United made an impressive debut under coach Louis van Gaal yesterday (Macau time), with Wayne Rooney scoring twice late in the first half of a 7-0 friendly victory over the LA Galaxy.
Ashley Young and defender Reece James scored two second-half goals each as United opened its summer tour with a surprisingly polished win.
Van Gaal doesn’t subscribe to the notion that such a friendly is meaningless, not when United have so much work to do this summer.
“I think always the results do matter,” Van Gaal said. “With such a result, you get confidence, and also confidence in a new system. The boys are willing to pick up all the info. We have given a lot of info, but it’s fantastic how they performed today.”
Van Gaal’s revealed a system similar to the attack of his Dutch World Cup team. The tactics might be unfamiliar to United fans, but they worked splendidly in a stunning start.
“When you see us train, you can expect something, but not 7-0,” Van Gaal said. “That for me was a surprise, and there were some beautiful goals. They scored out of some good attacks.”
Danny Welbeck scored the first goal for Van Gaal, who has had limited work with his new club after leading the Netherlands to a third-place finish in Brazil earlier this month. United still outclassed the Galaxy in the friendly between two of David Beckham’s former clubs.
Luke Shaw and Ander Herrera also made their debuts while United won by a familiar American football score at the Rose Bowl, the venerable college football stadium.
Van Gaal was hired to repair the 20-time English champions after David Moyes’ poor tenure. United finished seventh in Moyes’ only season as Alex Ferguson’s replacement after 26 years, failing even to qualify for the Europa League.
Rooney wasn’t United’s captain, ceding the job to Darren Fletcher, but the England star easily handled his scoring chances. James wasn’t even listed on United’s 25-man squad, but the 20-year-old defender provided two outstanding finishes against the Galaxy’s ragged defense.
“I have nothing but respect for the show that Man United put on,” Galaxy coach Bruce Arena said. “Getting punished for mistakes and really getting a lesson on the speed of play, we can actually use it as a positive for them.”
Herrera, the Spanish midfielder acquired from Athletic Bilbao last month, looked sharp throughout the night. United scored its first goal under Van Gaal when Juan Mata set up Welbeck in the 13th minute for a low 25-yard shot off Jaime Penedo’s post.
After A.J. De La Garza was penalized for a handball in the 42nd minute, Rooney easily buried the kick even though Penedo guessed correctly. Four minutes later, Welbeck’s centering pass went through the legs of Galaxy defender Tommy Meyer, who crumpled to the ground as Rooney walked the ball into Penedo’s net.
James put a sharp side-footed finish on a pass from Young for United’s fourth goal in the 62nd minute. He then scored from distance on a deflection in the 82nd minute before Young capitalized on defensive blunders for two late goals.
United’s tour continues Saturday in Denver against Roma, followed by matches with Inter Milan in Washington on Tuesday and Real Madrid in Michigan on Aug. 2. AP 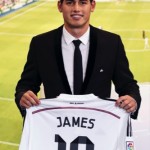 Luis Suarez could make his Barcelona debut against Real Madrid at the Santiago Bernabeu Stadium on Oct. 26. The Spanish league announced its schedule for the 2014-15 season yesterday and the first “clasico” will take place shortly after the end of Suarez’s four-month ban for biting an opponent at the World Cup.