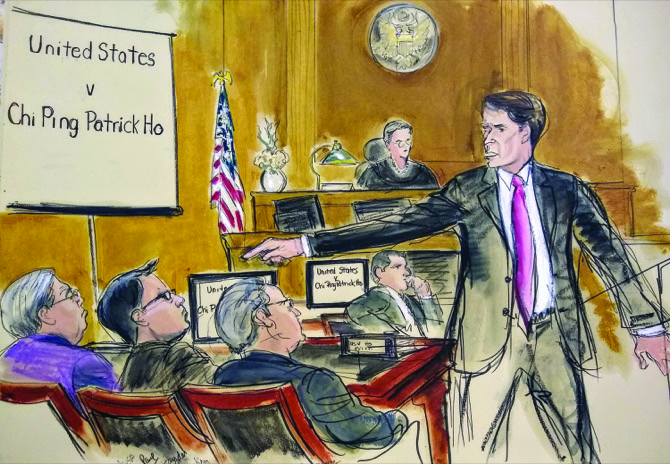 A former president of the United Nations General Assembly said Tuesday that he never witnessed “anything improper” on the part of a prominent Hong Kong businessman on trial in New York on charges of bribing government leaders in two African nations to land lucrative business deals for a Chinese oil and gas conglomerate.

Vuk Jeremic reported to the indicted businessman, Dr. Chi Ping Patrick Ho, when he worked as a consultant for CEFC China Energy. Jeremic told a federal jury that he connected Ho to high-ranking officials in several countries and opened diplomatic doors for CEFC as it expanded its business around the globe.

But in an interview following his hourslong testimony, Jeremic said he never had concerns about Ho’s dealings.

“I have never witnessed him say anything improper in my life,” he said outside a Manhattan courtroom.

Jeremic provided The AP a letter from the U.S. Justice Department that said even though he was called to testify, “he has neither been charged with nor is alleged to have committed a crime.”

Jeremic, who leads the opposition party in Serbia, said he has been “vilified” and faced “brutal” criticism in his home country over his involvement in Ho’s proceedings.

“It’s been portrayed as if I were on trial,” he said. “It was very important for me to clear Serbia’s name.”

Jeremic also sought to distance the United Nations from the criminal proceedings, even though one of the officials Ho is charged with bribing, Sam Kutesa, Uganda’s foreign minister, also served as president of the U.N. General Assembly when Ho sought him out.

Jeremic’s remarks came on the second day of Ho’s trial. Ho, a former home affairs secretary in Hong Kong, has pleaded not guilty to charges of conspiracy, money laundering and violating the Foreign Corrupt Practices Act.

Among other allegations, he is accused of paying a USD2 million bribe to the president of Chad, Idriss Deby, in an attempt to steer oil rights to CEFC.

Ho’s defense attorneys have argued the payments amounted to charitable donations and that they were legal and documented. AP