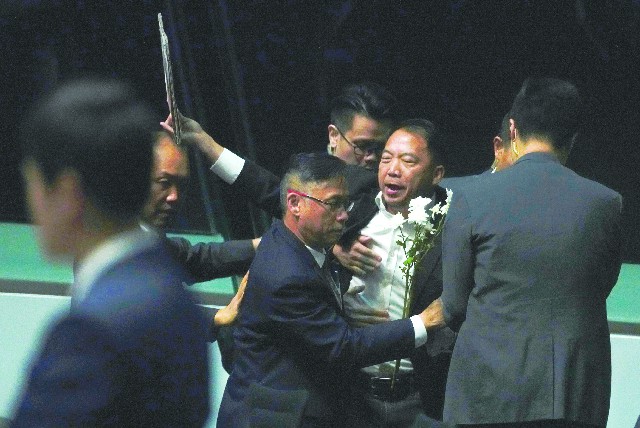 Hong Kong’s legislature was interrupted for the second straight day as pro-democracy lawmakers shouted down Chief Executive Carrie Lam, a day after their protests forced her to deliver her annual policy address by video.
About a dozen opposition lawmakers were dragged from the city’s Legislative Council by security staff yesterday for raising noisy objections. The ejected legislators shouted at Lam and waved placards that showed the chief executive with blood on her hands from recent violent protests in the financial hub.
The body’s president suspended the session twice, but the opposition’s disruptions resumed with the proceedings. When the session was eventually adjourned – with only three questions asked by friendly, pro-establishment lawmakers – the opposition politicians followed Lam out of the chamber, yelling at her.
The pro-democracy bloc only comprises about one-third of lawmakers, but the displays this week showed they have the ability to delay or even shut down debate on major economic initiatives, even if they don’t have the votes. That spells even more trouble ahead for an economy sliding into recession as protests against Beijing’s grip over the city grow increasingly violent.
A day earlier, agitating lawmakers used a projector to shine the protest slogan “Five Demands, Not One Less” onto her face, with Lam repeatedly pausing as she tried to deliver her policy address in the Legislative Council, known as LegCo. Finally she gave up, and delivered her address, which normally details economic priorities, via video instead. 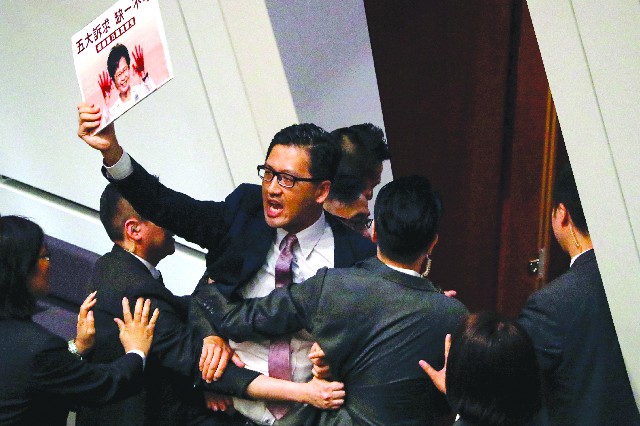 “If she fails to respond to the five demands, it would be a fantasy to expect normal business to resume in the Legislative Council,” said Alvin Yeung, a pro-democracy lawmaker who participated in the disruption, on Wednesday. “All of these livelihood issues, she could have introduced them a year ago. She’s trying to compete for popularity. She’s trying to win over people’s hearts. But this is doomed to fail without any legitimacy.”
In her address, Lam pledged to make housing more affordable and promised cash handouts for students, many of whom have been on the front lines of demonstrations that have spurred regular clashes with police over the past four months. They were among some 200 initiatives aimed at easing some of the discontent that has fueled the protests.
But she’ll have a hard time implementing them as well as a $2.4 billion stimulus package announced in August without the support of lawmakers.
“Many of these measures cannot be implemented without funding approval from the Legislative Council,” James Lau, acting Financial Secretary, said in an emailed statement on Wednesday, referring to the stimulus. A backlog of projects worth more than HK$70 billion ($8.9 billion) and involving about 14,000 jobs is awaiting approval by the Finance Committee, Lau said.
More than 50 legislative proposals are currently awaiting action, according to an Oct. 16 meeting agenda. While some deal with mundane administrative issues – fees on karaoke parlors and bus route schedules – others include deliberations on a face-mask ban implemented under a colonial-era emergency law and the official withdrawal of the extradition bill that sparked the protests.
“We’ve already suffered from delays in many, many discussions,” said Iris Pang, economist with ING Bank NV in Hong Kong. “I have no idea when those policies in the policy address can really be discussed or passed in the Legislative Council. This is a big question mark I think every Hong Kong person has in mind now.”
Regina Ip, a member of Lam’s advisory Executive Council, said it was still possible to push things through despite the “disgraceful” interruptions by opposition lawmakers. Certain measures announced in the policy address that don’t require new funding – including relaxed mortgage rules for first-time home buyers and land requisition for new housing – could be implemented without lawmaker approval, she said.
Still, Ip said the blame for inaction would lie with the opposition lawmakers, if they don’t let meetings proceed as planned. “What they’re doing is very destructive, very hurtful to Hong Kong,” she said. MDT/Bloomberg 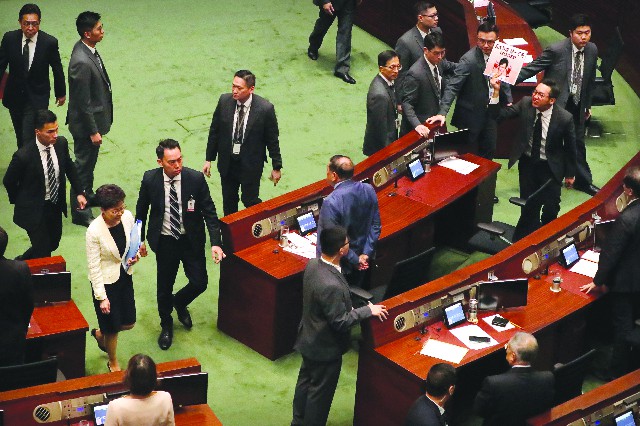