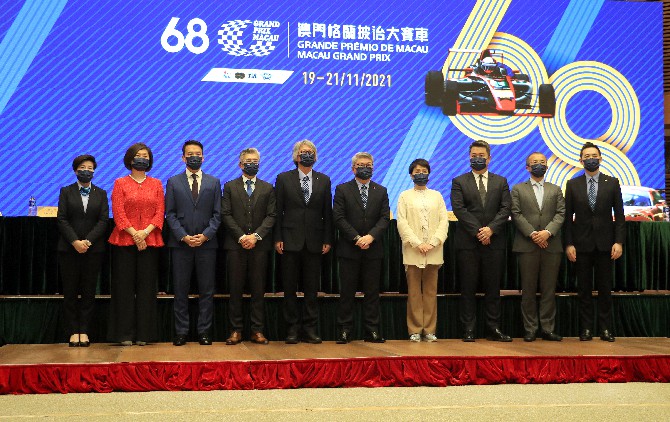 For the first time in the history of the Macau Grand Prix (GP) event, the six gaming concessionaires have coordinated to sponsor each of the racing events that are part of this year’s program individually.
At the announcement of the program of this 68th local GP, it was also announced that the six gaming concessionaires would be the sponsors of this year’s competition, each one taking the sponsorship of one of the racing events.
SJM Resorts, S.A, Sands China Ltd, and Galaxy Entertainment Group will title-sponsor the main events of the program, the Formula 4 Grand Prix, the Macau GT Cup, and Macau Guia Race, respectively.
As for the other three gaming concessionaires, Melco Resorts & Entertainment, MGM China Holdings Limited, and Wynn Macau, Limited, they will be sponsoring the Macau Touring Car Cup, Greater Bay Area GT Cup, and Porsche Carrera Cup Challenge, respectively.
Altogether, the six concessionaires have contributed with a total of 28.5 million patacas of a total budget announced to be 170 million patacas.
The figure appears to fall a long way short, especially considering that back in 2019, Suncity Group titled-sponsored the event alone, contributing 25 million patacas.
Nonetheless, the fact that the six concessionaires have jointly sponsored this year’s event has been regarded by the Coordinator of the Macau Grand Prix Organizing Committee (MGPOC), Pun Weng Kun, who highlighted the gesture in his speech, adding that the event is “the most important sports tourism brand of Macau.”
“As the epidemic in Macau stabilizes, holding this year’s Grand Prix as scheduled sends a clear message and demonstrates that Macau is a vibrant and safe city to visit. The associated positive effects of the Grand Prix serve to promote the development of different industries, and thereby boost the economy. In addition, the annual Grand Prix will be broadcast to countries and regions in the Mainland and overseas to positively promote the image of Macau,” Pun added.
Like past Macau Grands Prix, the safety, medical, rescue, and working vehicles for this year’s GP will be sponsored by BMW Concessionaires (Macau) Ltd., while Macau Industrial Ltd., will be the designated beverage sponsor.