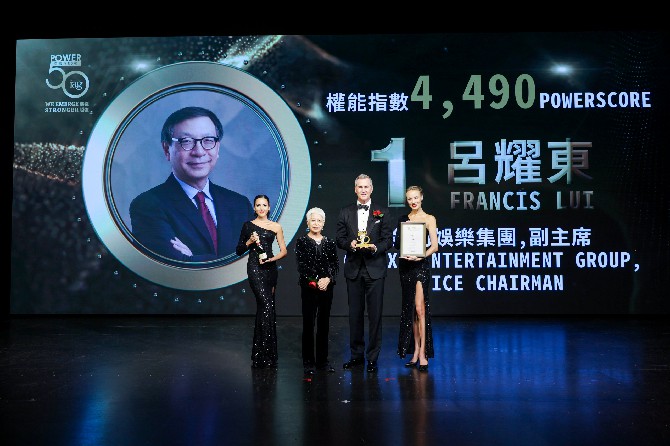 Galaxy Entertainment Group vice chairman Francis Lui has been named the most influential person in the Asian gaming industry for the third year in a row, after topping Inside Asian Gaming’s (IAG) Asian Gaming Power 50 list for 2021. This is the third consecutive year he has topped the list and the fifth overall, having previously ranked first in 2011 and 2012.
The passing of Las Vegas Sands founder Sheldon Adelson in January, who had ranked number one on the Asian Gaming Power 50 seven times in 2010 and from 2013 to 2018, resulted in significant movement in this year’s Top 10.
Melco Resorts & Entertainment Chairman and CEO Lawrence Ho moved into second place, and Genting Berhad patriarch Lim Kok Thay reclaimed third, a position he last held in 2016. MGM China’s co-chairperson and managing director Pansy Ho came in fourth, just ahead of the man who has succeeded Adelson as Las Vegas Sands Chairman and CEO, Rob Goldstein. Meanwhile, Wilfred Wong, president of Sands China, came in sixth, followed by Alvin Chau of Suncity Group, and Matt Maddox, director and CEO of Wynn Resorts.
During the event, which celebrates the 50 most influential individuals in the industry across the Asia-Pacific region, there was a tribute to the city’s late ‘casino king’ Stanley Ho and Sheldon Adelson. The 2021 Asian Gaming Power 50 was announced at a Black Tie Gala Dinner held in the Grand Theatre, Wynn Palace, on Friday night.