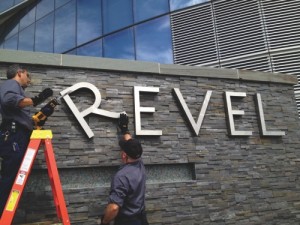 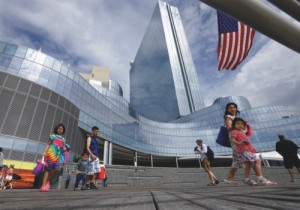 People walk on The Boardwalk past the closing Revel Casino Hotel

Revel Casino Hotel opened with a bang a little more than two years ago amid high hopes of turning around Atlantic City’s struggling casino market.
But the USD2.4 billion resort went out with a whimper in the wee hours of the morning yesterday, as its casino closed one day after the hotel checked out its last guest.
The property that debuted at sunrise on April 2, 2012, with its then-president joining New Jersey Lt. Gov. Kim Guadagno in a blueberry smoothie toast, quietly ended operations as the last handful of gamblers, who never turned out in great enough numbers to keep Revel alive, filed out of the sleek glass tower.
“When I started, it was promising. We had high hopes,” said Liditze Diaz, a restaurant worker at Revel. “Then we started hearing rumors, but I thought, ‘No way this place is going to close. It’s too new, too pretty.’ It’s hard to believe.”
Revel became the second Atlantic City casino to shut down over America’s Labor Day weekend, joining the Showboat, which closed its doors Sunday afternoon. Trump Plaza is closing on Sept. 16, and the Atlantic Club closed in January.
Atlantic City, which started the year with 12 casinos, will have eight before summer is over. Many casino analysts and industry executives say they expect the remaining casinos to fare better financially with less competition.
“It’s a shame,” said Ruthie Fenimore of New Jersey, one of the last gamblers to play at Revel yesterday. “I really love this place. This place would be perfect if it was in Las Vegas. It would be right up there with Wynn. All the restaurants were awesome and HQ is the best nightclub I’ve ever been to in New Jersey. I remember the first time I came here, I was lying on the bed opening and closing the curtains with a remote control. It blew my mind. The bathroom was bigger than my home.”
Fenimore won USD600 early yesterday, and kept an uncashed slot voucher worth 45 cents as a souvenir of a last bet at Revel.
Revel had been slated to close at 6 a.m., but staff shut it down 35 minutes early, pulling yellow chains across its entrances, and herding the small handful of gamblers that remained inside toward the doors. A pre-recorded announcement programmed in advance blared through loudspeakers precisely at 6 a.m., saying “Attention: Revel Casino is now closed.” Immediately, lights began snapping off inside the glass-covered building, built to appear as it if had been sculpted by waves.
But Revel had gone mostly dark hours earlier. Its hotel, shaped like the 1950s cartoon character Gumby, was closed on Monday, and it was virtually invisible in the early morning darkness. The iconic ball atop the building, designed by the son of actor Frank Gorshin, who played “The Riddler” on the “Batman” TV series, was also turned off, and the only illumination was two emergency red lights at the very top of the structure to warn away approaching aircraft.
The consolidation pummeling Atlantic City is a reaction to the saturated northeastern U.S. casino market, which continues to add new gambling halls.
None was a costlier failure than Revel.
The casino broke ground just before the Great Recession. It ran out of money halfway through construction and had to drop its plans for a second hotel tower while scrambling for the remaining $1 billion or so it needed to finish the project. When it opened, it was so laden with debt that it couldn’t bring in enough revenue to cover it.
The idea behind Revel was to open a totally different resort, a seaside pleasure palace that just happened to have a casino as one of its features. That included Atlantic City’s only total smoking ban, which alienated many gamblers; the lack of a buffet and daily bus trips to and from the casino; and the absence of a players’ club. By the time those decisions were reversed, it was already too late. High room and restaurant prices hurt, too.
“They had to bring people in — give the customer what they want — and they weren’t doing that,” said Aubrey Becht, a slots attendant. “They wanted the high-limit people, and there’s not too many of those.” AP