Gere, quiet and moving in portrait of a homeless man 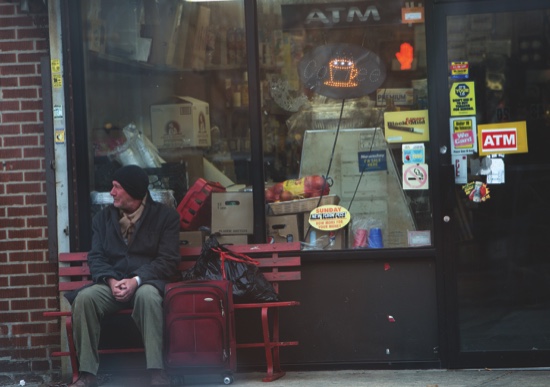 Richard Gere appears in a scene from “Time Out of Mind”

Spare change? Any spare change?” The man holding the cup in the street looks, from a distance, like just some guy in a wool cap, formless parka and rumpled pants.
Only this is Richard Gere, and if you looked a little closer, you’d recognize those silver-haired good looks and that chiseled face. And those people on the streets in “Time Out of Mind” are actual New Yorkers who often walked by the movie star, oblivious, as director Oren Moverman was shooting, proving — if it needed to be proven — that we don’t really look at homeless people among us, even if we’re handing them a few quarters.
But Gere’s character, George, also clearly has no desire to be looked at. He seems to wish he could be invisible. And in this almost documentary-­style portrait of a homeless man — clearly a labor of love for Gere, who’s also a producer here — the actor succeeds in moving us deeply, precisely because he doesn’t call attention to himself in an “actory” way. And yet, the cumulative effect is heartbreaking. 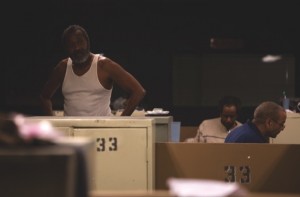 Ben Vereen appears in a scene from, “Time Out of Mind”

Although its plot is sparse, one of the things “Time Out of Mind” does best is to convey the sense of stunned befuddlement George feels at his predicament. WE may know that he’s a homeless man, but it takes George nearly three-quarters of the movie to actually say, “I’m homeless,” and even then, it’s more an incredulous question than a statement. It’s also one of the clearest things George ever says. The man is living in a permanent haze of confusion.
George wasn’t always this way. Slowly, we learn he was once employed, a husband, and a father. But tragedy struck, and eventually he lost his job, his home, his family (he’s estranged from his one daughter). When we meet him, he’s trying to catch some shuteye in the bathtub of a friend. (The desperate effort to get a few hours of good sleep — when one doesn’t own a bed — is one of the film’s most depressing motifs.)
We have no idea how long he’s been there. But the friend has been evicted, and George must leave. “You don’t live here, all right?” snarls the surly building superintendent (Steve Buscemi, one of several big names, including Kyra Sedgwick, in small cameos).
George takes his small red suitcase (soon, he won’t have even this) and looks for a place to sleep, to sit, to just BE. He tries the subway. He tries the emergency room waiting area, but can’t stay there because it’s not under 32 degrees outside. He tries to seduce the nurse — “I’m really clean” is his grim pickup line — just so he’ll have a warm bed. 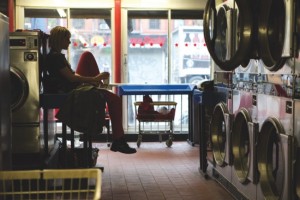 Jena Malone appears in a scene from, “Time Out of Mind”

We watch as George slowly tries to navigate his way through the city’s social services. Some of these scenes take patience: from George, and from us. There are constant questions: Where’s your birth certificate? What was your last residence? Usually, he just stares into space or shakes his head.
The brightest spark, if you can call it that, comes from the talkative companion George finds at a homeless shelter — Dixon (a wonderful Ben Vereen), who says he’s a former jazz musician and regales George with stories. Dixon entertains us, but he sometimes infuriates George, who’s simply desperate for some quiet.
That search for quiet is another unexpectedly devastating element of the film. Moverman and Gere surround George with conversations — extra loud — that ordinary people are having around him: on the subway, on the phone, in Grand Central Station. These conversations seem to bore themselves into George’s brain, reminding him that he has no more connections in life.
As he himself says at one point: “I don’t know anybody anymore.” Gere, whose acting skills have inexplicably been underrated for years, says this line quietly, almost mumbling. But it has enough force that he could be shouting it off the rooftops. Jocelyn Noveck, AP

“Time Out of Mind,” an IFC Films release, is not rated. Running time: 120 minutes.