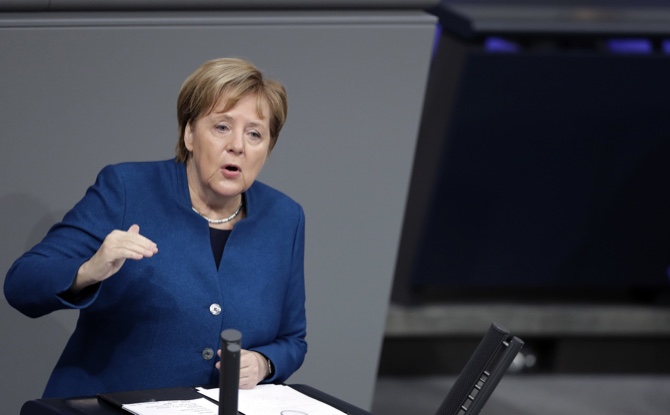 Chancellor Angela Merkel rejected calls from nationalist lawmakers for Germany to drop its support for a U.N.-backed agreement on migration.

Several countries — including the United States, Hungary, Austria, Israel, Australia and Poland — have announced they won’t back the Global Compact for Safe, Orderly and Regular Migration, set to be approved next month in Marrakech, Morocco.

Speaking during parliament’s annual budget debate in Berlin, Merkel told lawmakers that the pact would ensure “reasonable conditions” elsewhere that already exist in Germany, such as the right for migrants to access health services and get financial support.

“That’s why it’s in our national interest that the conditions around the world, for refugees on the one hand and migrants on the other, are improved,” Merkel said.

Opposition to the pact has come mainly from the far-right Alternative for Germany party, but a number of lawmakers from Merkel’s own party have also begun to question the agreement.

Health Minister Jens Spahn called recently for a broader debate about the pact and, if necessary, for a delay in approving it. Spahn appears to be trailing other high-profile candidates in a bid to succeed Merkel as leader of her Christian Democratic Union party next month.

One of the leading contenders, Friedrich Merz, called yesterday [Macau time] for a clarification that the U.N. pact won’t create any new grounds for asylum “through the back door.” At an event in eastern Germany with the other candidates, Merz also advocated a wider discussion on how the right to asylum in Germany is defined.

Merkel, who has announced she won’t run for a fifth term in 2021, said the migration pact is an example of the way in which global problems can only be solved through international cooperation.

Amid a rise in nationalist sentiment around the world, Merkel has become one of the most vocal defenders of multilateralism, frequently noting that Germany owes its revival after World War II to institutions such as the European Union and United Nations.

Weidel used much of her speech to defend her party over its receipt of foreign donations and accuse rivals of having similarly dubious sources of income.