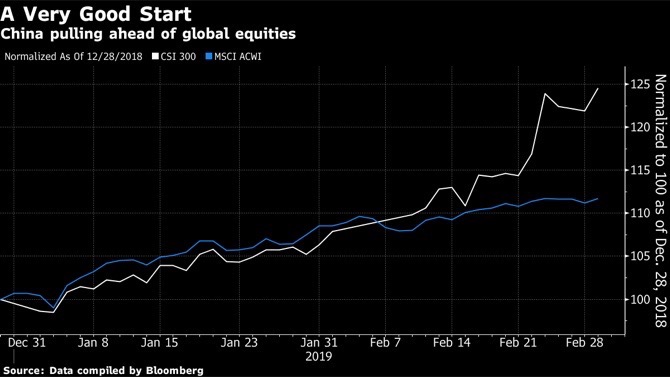 Chinese stocks have had a great start to 2019, and it may not stop there.

The benchmark CSI 300 Index has risen 25 percent this year, outperforming all other major stock gauges. The offshore yuan has risen more than 2 percent versus the U.S. dollar. And while Goldman Sachs Group Inc. and JPMorgan Chase & Co. say some sectors are fairly valued or even expensive, they also see China-related assets where further gains are likely.

“We see room for modest multiple expansion for China,” Goldman strategists led by Timothy Moe wrote in a note March 2. “We estimate an average 4 percent further upside in offshore equities if trade news improves further. For trade-related names, we see better value in the U.S.-exposed China stocks than the regional exporters.”

And they aren’t alone in seeing some areas that are still ripe for investment.

“We anticipate further gains, but at a slower pace and conditional on policy lifting growth and earnings expectations,” in the second half of the year, JPMorgan strategists led by John Normand wrote in a note March 1. “China equities are worth overweighting more than CNY, and agriculture is now a more interesting catch-up trade than base metals.”

Multiple factors have helped drive the rebound in Chinese stocks this year. Optimism increased about the U.S.-China trade situation, while the People’s Bank of China moved to cushion the country’s economy and Beijing’s new chief securities regulator made a call to “ revere the market.” And then there was the widely-anticipated announcement last week that MSCI Inc. would boost the weighting of mainland-listed shares in its indexes.

Both Goldman and JPMorgan cautioned in their reports that further strong performance in China-related assets is highly contingent on the outcome of trade talks with the U.S., including the details of any deal.

JPMorgan sees the yuan and local-currency bonds as looking expensive right now, while copper is “slightly” dear. Aluminum and soybeans look cheap, the firm said, and metals & mining stocks are undervalued along with other cyclicals like tech and financials.