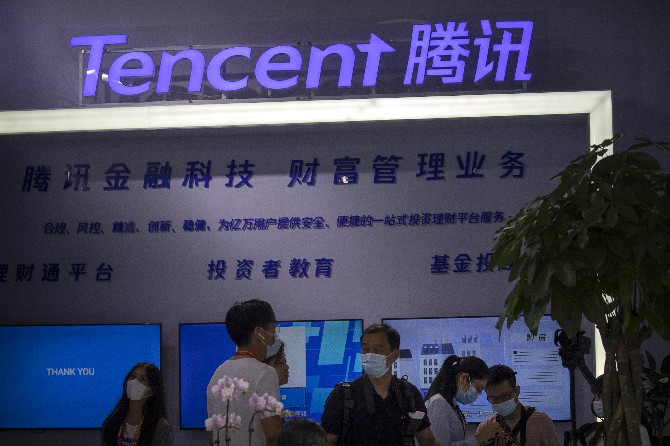 China’s internet watchdog said yesterday it has fined platforms operated by e-commerce company Alibaba and gaming firm Tencent for spreading sexually suggestive content involving children, as regulators seek to clean up content harmful to minors.
Platforms including Alibaba’s e-commerce marketplace Taobao, Tencent’s QQ messaging service, live-streaming site Kuaishou, microblogging platform Sina Weibo and social media and e-commerce service Xiaohongshu were fined for distributing sexually suggestive stickers or short videos of children, it said.
The companies were ordered to rectify the issue and ban accounts that use such content to attract more traffic.
The crackdown on inappropriate content involving minors comes as the government ramps up scrutiny of technology platforms in the country. Regulators are investigating Chinese technology companies over a range of issues, including anti-competitive practices and data practices.
“With regards to the infringement of the legal rights and interests of minors, a ‘zero tolerance’ attitude will be adopted and enforced to clean up the online problems that endanger the physical and mental health of minors,” the Cyberspace Administration of China said in a statement.
In recent months, some Chinese media outlets have called out sexually suggestive photos of children used by certain stores on platforms such as Taobao and Xiaohongshu to sell clothing, as well as suggestive stickers of children on messaging apps.
The internet regulator said its campaign includes the targeting of minors on live-streaming platforms, pornographic and violent content in courses on online education platforms and animations with violent or inappropriate horror themes.
Earlier this month, the regulator said it would probe ride-hailing company Didi Global Inc. over data security concerns. Alibaba in April was also fined $2.8 billion following an anti-monopoly probe, and food delivery giant Meituan is being investigated over alleged antitrust practices.
The internet watchdog also recently announced that it would require companies looking to list abroad to seek its approval first.
Globally, technology companies and governments are paying more attention to how to prevent the exploitation and abuse of children online.
Last year, a coalition of technology companies including Facebook, Google and Microsoft backed a plan to eradicate online child abuse.
The U.K. last month also issued a new guidance to companies on how they can protect children from sexual exploitation and abuse on their platforms. Zen Soo, Hong Kong, MDT/AP