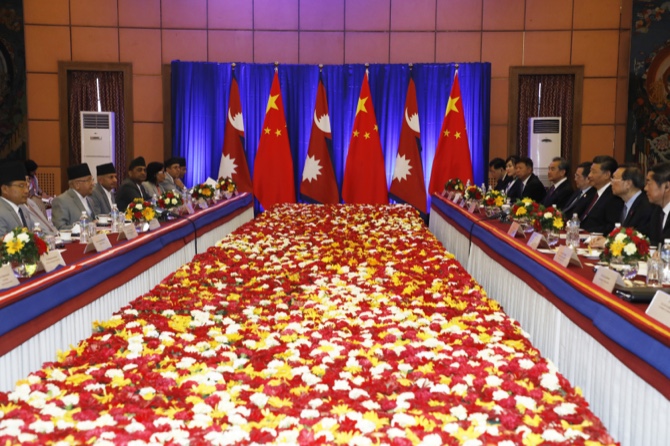 Nepal and China signed 20 agreements yesterday including one on a trans-Himalayan railway, as Chinese President Xi Jinping wrapped up a two-day visit to the Himalayan nation.

After talks in Kathmandu, Xi and Nepalese Prime Minister K.P. Sharma Oli witnessed the signing of 18 agreements and two letters of exchange in areas of connectivity, security, border management, trade, tourism and education.

One of the deals includes an understanding to start a feasibility study of a China-Nepal cross-border railway project being considered under an ambitious project that is a component of China’s signature Belt and Road Initiative.

China is working to stretch out the Qinghai-Tibet railway up to Keirung, a border town less than 35 kilometers from Nepal, by 2020. Kathmandu, Nepal’s capital, is around 70 kilometers from the border point.

A statement issued by Nepal’s Ministry of Foreign Affairs made no mention of an extradition treaty that was expected to be high on the agenda of the meetings.

Nepalese officials earlier ruled out the possibility of any immediate agreement on the extradition issue. China has been pressing Nepal to sign the treaty for some years to improve the administration of border areas and fight against illegal border crossing and transnational crimes like banking fraud, trafficking and the smuggling of gold and wildlife parts.

India has extensive influence on Nepal’s economy and politics, while China and Nepal share a border covered with high mountain peaks. Nepal is traditionally cautious in building relations with its bigger neighbors India and China.

Xi’s visit and the subsequent deals could be seen as an important development between the two countries as India traditionally maintains close relations with Nepal for their shared religious, cultural and historical ties and a 1,751-kilometer border on three sides.

In a counter move involving a historic trade and transit treaty signed between Nepal and China in 2016, New Delhi in 2018 announced the expansion of India’s railway system to Kathmandu and access to its waterways.

In an article published in Nepali media ahead of his visit, Xi described Nepal as the first South Asian country to be designated an approved destination for Chinese tourists and pledged China’s support of Visit Nepal 2020, an ambitious plan unveiled by Oli’s government to bring in 2 million foreign tourists in a year.

Kapil Shrestha, a political science professor at Nepal’s Tribhuvan University, said Xi’s visit is likely to pave ways for greater engagement between the two countries, and would check India’s “high-handedness in Nepal’s affairs.”

“This visit will slightly curtail India’s influence and force New Delhi to think twice before imposing an economic blockade like it did in 2015,” Shrestha said. “For China, Nepal, with a favorable government in Kathmandu, is the easiest route to spread its tentacles in South Asia.”

But Nepal’s position on Tibet remains an issue of concern.

Shrestha said that in its pursuit to improve ties with China, Nepal should not compromise in its core values like democracy and human rights, and protect the rights of Tibetan refugees.