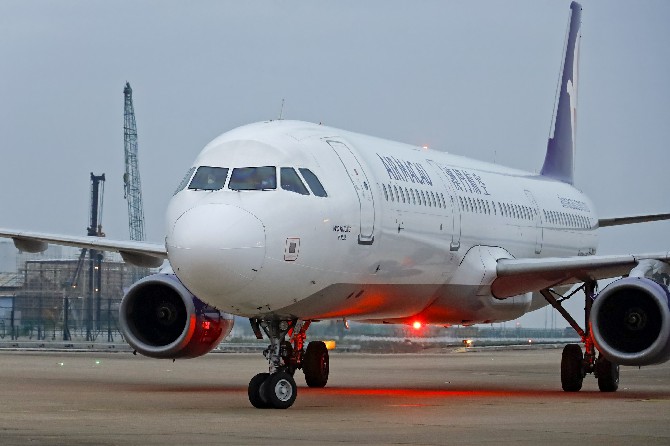 Local authorities are preparing a “mega” operation to receive a flight from Air Macau arriving from Tokyo that will bring back 115 residents to Macau from 13 different countries, the health authorities confirmed yesterday during the weekly press conference from the Novel Coronavirus Response and Coordination Center.
As the Times previously reported, the flight will arrive on the evening of January 21 and is the only possible means for Macau residents who are not Chinese nationals to return to the SAR due to the border restrictions in force.
According to Dr Alvis Lo, medical director of the Conde de São Januário Hospital, local authorities are carefully preparing the operations to receive this flight.
Questioned by the media as to why the flight requires such careful attention, the Coordinator of the center, Leong Iek Hou, responded that most of the passengers on this flight are arriving from very high-risk areas, including places where a new strain of the virus has been detected.
“These residents are coming from countries where the [pandemic] situation is worsening and there are already cases with a new mutation of the virus, so we have decided to increase our protective measures even further and plan an operation that will be all done in a closed circuit,” Leong explained.
Common protocols were enforced last year during the peak of the pandemic when flights with returnees arrived in Macau, such as governing the use of personal protective equipment (PPE) for all passengers and crew and restrictions, the consumption of food and drinks onboard and even toilet usage.
Local authorities is slated to conduct similar protocols again.
Authorities are now aiming to create a protective bubble from the point that passengers board the plane until the point in time when they are placed under medical observation in quarantine at the designated quarantine hotel – Grand Coloane Resort.
“We have been preparing this operation for about one week with several interdepartmental meetings. We will adopt rigorous control measures in all phases so that even if there are cases of infection [among the passengers], this will happen during the period of medical observation and during the closed-circuit management so there is no community contagion. [This ensures that any transmission] does not affect the population [in general] and will also not force us to suppress the current mechanism of entry and exit of people from the mainland,” Lo said.
The measures highlighted by Lo include the need to organize the seating plan on the plane from Tokyo to Macau by group, according to the passengers’ place of origin and previous flights to reduce the risk of cross-infection.
Passengers are also requested to minimize eating, drinking or using the toilet. Air Macau will place “dry food” on the seats to avoid the need for the crew to have contact with the passengers.
On this particular matter, the representative of the Macao Government Tourism Office (MGTO), Lau Fong Chi, has clarified to the media that passengers will not be forced to use a diaper during the flight, as has been alleged over social media.
Lau noted that diapers are part of the PPE set for both adults and children and are included in the international regulatory practices from airliners during flights during the pandemic period, but clarified that their use is not mandatory “unless, by some necessity, the onboard authorities decide to ban the access to the restrooms.”
Lo also noted that other measures include the facilitation of two Covid-19 tests on all passengers upon their arrival in Macau.
“We will collect two samples simultaneously – one to conduct a fast test (with results within two hours) and another routine test. If the fast test result returns a negative result, the passenger is directed to the hotel where they will be quarantined for 21 days. During this period, each passenger will be subjected to four tests (on the first, fifth, twelfth, and twentieth days). If the fast test result is positive, the passenger will be sent to the Public Health Clinical Centre in Coloane to initiate treatment,” Lo explained.

Gov’t warns people to not approach passengers
Due to concerns that over 50% of the 115 passengers flying back to Macau are residents under 25 years old, most of whom are students, the authorities have specifically requested family members in Macau to refrain from approaching the passengers from the flight.
“Taking into account the restrictive measures in force at the airport and the hotel, I urge the parents or guardians not to go to the airport or the hotel [to attempt to approach the passengers]. The process will be managed in a closed-circuit so the parents will not be able to have any contact with their children,” the representative of the MGTO said during the press briefing. “I know that parents will be worried about their children […] but they should not worry because after being lodged in the hotel they will receive hot meals and, when necessary, parents can deliver other goods to the hotel the next day,” Lau remarked.
The same official also noted that besides the majority of the passengers aged under 25 years old, the list of passengers includes two children aged under 2 years old and several adults and senior residents.
To avoid any breach of the restrictive measures, the Public Security Police Force (PSP) will be also cooperating with other authorities to ensure that all procedures are followed on arrival, oversee transportation to the hotel, and maintenance of public order at the airport, the PSP representative added.

Nearly half of all requests received by the local authorities from non-resident workers (TNR) stranded outside the region who wish to return to Macau to work have been rejected, the health authorities informed in response to a media inquiry.
Local authorities received 288 requests involving 354 people, approximately 150 of which have been denied.
Authorities explained that in most cases, the decision not to approve applicants’ return to Macau was due to inaccurate information received from the TNR. In most cases, further investigation revealed that the documents in their possession (blue cards and working contracts) had already expired or were terminated, putting the workers outside the criteria that permit a return by special order of the Chief Executive.
In the meantime, the requests of the 128 TNRs have been green-lighted by the government.