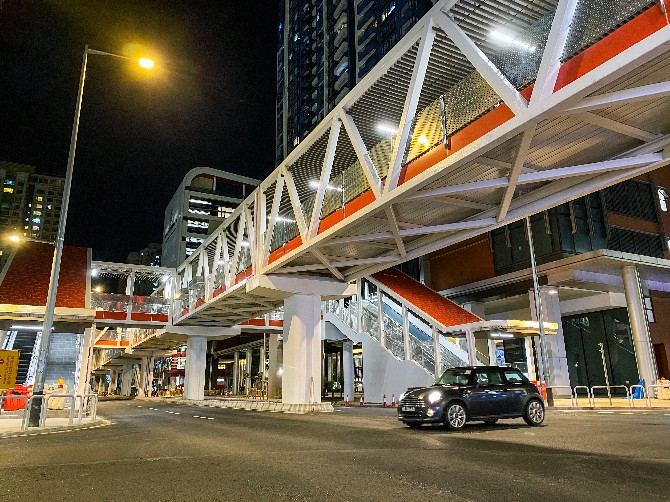 The Land, Public Works and Transport Bureau (DSSOPT) has refuted criticism coming from several sectors of society regarding alleged construction defects in Taipa’s recently opened pedestrian flyover.
In a statement, the bureau said, that in relation to the “failure of elevators and escalators, DSSOPT stresses that there was no damage in these situations.” They went on to say that as the flyover is in an initial phase of use there are details still being finalized and adjustments being made by the contractor.
Responding to complaints about rust on the fences of the pedestrian crossing, DSSOPT replied that “the material used is stainless steel, and we found that these marks are dirt stains. Since the premises has just been opened, DSSOPT asked the contractor to improve their work and clean the premises [of] any stains left during the execution of the work.”
The bureau reiterated that an inspection by the staff of both the DSSOPT and the contractor found “no cracks in the connections, nor any problem concerning the safety of the structure.”
The response comes after several members of the public and a member of the Islands District Community Service Consultative Council had publicly criticized the construction.
Council member Ng Hong Kei had expressed several concerns, especially over the malfunctioning of the elevators and escalators. “Since there are no longer zebra crossings on the road beneath the flyover, if the lifts continue to break down it will cause a lot of inconvenience to residents, especially those with physical disabilities,” he said.
Lo Chung Yee, a member of the same council, also expressed concerns about the safety of road traffic in the crossroads located under the flyover. The structure of the flyover is said to block drivers’ vision, creating blind spots.