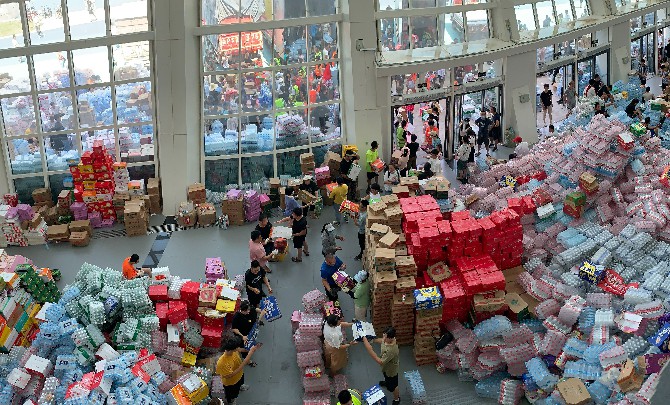 Trucks carrying water and food yesterday streamed into a Chinese city at the center of flooding that killed at least 63 people, while soldiers laid sandbags to fill gaps in river dikes that left neighborhoods under water.
Residents cleared away mud, wrecked cars and other debris after record rains that started Tuesday and flooded streets and disrupted train service. The rains subsided earlier in the week but some neighborhoods still were waiting for water up to two meters deep to drain.
Yesteday, the provincial government raised the death toll to 63, with five people missing, state TV reported. It said 8,876 homes collapsed.
Trucks dropped off instant noodles and other goods at a stadium in Xinxiang, 40 miles north of the metropolis of Zhengzhou in Henan province. Volunteers shifted pallets of drinking water stacked higher than their heads onto other trucks for distribution.
The volunteers occasionally broke into cheers of, “Go, Xinxiang!”
“My tears came down when we were welcoming the vehicles one by one and shouting ‘Good work! You’ve done a great job!’” said a 45-year-old volunteer. She would give only her surname, Zhang.
Zhang said she had to walk down 15 floors from her apartment after the flooding knocked out power.
Direct economic losses throughout Henan were estimated at 13.9 billion yuan ($2 billion), according to the official Xinhua News Agency. It said a total of more than 3,800 houses collapsed across the province and 920,000 people were evacuated from their homes.
Emergency crews were trying to close gaps in flood dikes that flooded sections of some villages.
Soldiers and paramilitary police dumping stones and sandbags into a 100-meter-long, eight-meter-deep gap in a gap on the Weihe river in Xinxiang, the official newspaper The Global Times reported.
On Saturday, authorities intentionally had flooded parts of the nearby city of Hebi to lower water levels elsewhere, according to the Shanghai online news outlet The Paper. Dake Kang, Xinxiang, MDT/AP