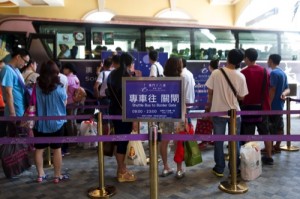 The government has launched a MOP5.3 million study to assess how residents, tourists and non-resident workers move around the city. The survey’s results will be used to outline future transportation policies.
Four surveys have been commissioned to Umtec Limited, a company working in conjunction with the University of Macau, to understand Macau citizens’ current transportation needs and habits.
Three of the surveys have already been carried out.  However, in a press conference held on Friday, DSAT’s head of Traffic Planning and Development, Kuong Vai Cheok, said that data is still being processed. While one survey focuses on studying the needs of tourists in terms of moving around the city, the other two addressed casino employees working in shifts and non-resident workers who live in mainland China and therefore need to cross the border frequently.
To complete the study, a fourth survey will be carried out between September and January next year, addressing 3,600 Macau households selected for sampling by the Census and Statistics Service (DSEC).
A similar survey was carried out back in 2009, aimed at assessing residents’ means of transportation as well as its suggestions on transport policies. Although recognizing that Macau’s traffic has worsened over the past five years, Mr Kuong Vai Cheok stressed that conducting another survey is particularly relevant in order to update data on how people move within the city, thus substantiating a redesign of government’s transport policies.
“Between 2009 and 2014, we noticed that traffic conditions did not improve, quite the opposite. We notice differences in how people move around [the city]. After five years, it is appropriate to carry out a survey to update the data,” he said.
Kuong Vai Cheok recalled how Macau’s traffic situation has changed since 2009, stressing that residents’ expectations of transport policies have most likely altered, too.
Umtec Limited project manager, Mr Ku Weng Keong, justified a MOP5.3 million investment in this year’s survey, stating that the project features four surveys and in-person interviews, which implies significant costs in terms of human resources.
While a deadline to complete the study hasn’t yet been set, according to Umtec Limited project director, Mr Wong Ka Io, the contract states that the project should be concluded by the end of 2015.
Macau households, including people living in the peninsula, Taipa and Coloane, will be notified via an official letter 14 days prior to the interview. The interview date may be rescheduled according to family members’ availability.
100 University of Macau students working with Umtec Limited will be conducting in-person interviews, properly identified by their respective identity cards and uniforms.
Interviewers will focus on data related to residents’ needs and routines on transportation in Macau. Questions will address the number of residents’ family members, as well as their age, professions, qualifications, vehicle ownership, and means of transport used daily. Residents will also be asked for suggestions on Macau’s transport policies.
All data collected throughout the interviews will be delivered under a confidentiality agreement, and will be deleted upon completion of the survey.