GT CUP | From vision to reality, speeding in a circuit like no other 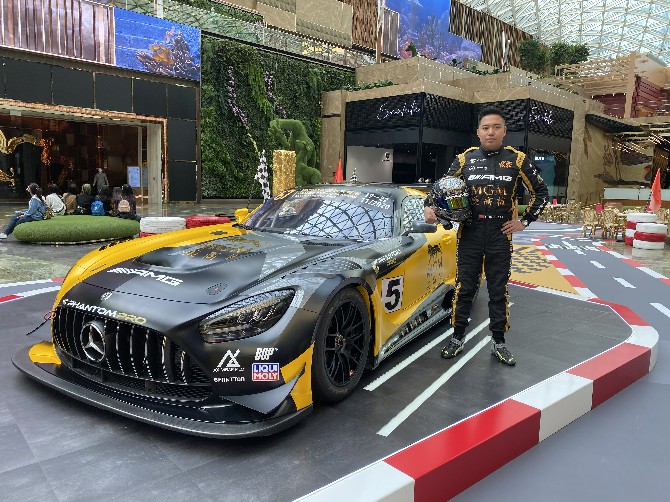 Chris Chia had dreamt of this moment for so long — the time he would make his first appearance as a racer in the Macau Grand Prix.
Sitting in a café in MGM Cotai yesterday afternoon, Chia recounted his enthusiasm for motorsports, which was kindled for the first time while watching the Grand Prix in this city as a child.
Against the backdrop of dolphins gliding in the air at the Spectacle in the hotel, the award-winning racer exuded a great degree of composure and self-assurance whilst relating his career. The tranquility of his surroundings and Chia’s calm tone made it hard to imagine that he was going to compete in one of the world’s most challenging circuits just days later.
“Macau Grand Prix is a revered race to me. It is a ‘pilgrimage’ I think every professional racer should make in their lives,” he told the Times in an exclusive interview.
Chia is a stellar racer under Phantom Pro Racing, a motorsport racing team founded in 2018, which has swiftly vaulted to fame owing to its singular track record in both national and international matches.
So far, the team has garnered over 30 championships. In 2019, it was named the Annual Team Champion in the China GT Championship. Shortly after that, the team represented China at the FIA Motorsport Games (GT Cup) held in Italy last year, where they secured a global standing of No.5.
The Macau Grand Prix, in its 67th edition this year, will take place in the city between November 20-22, and will be Chia’s first race since the outbreak of Covid-19.
The city’s famed automobile competition will also be the very first race for many other racers who hail from China, Macau, Hong Kong, and Taiwan post-pandemic.
The Covid-19 pandemic has dealt a huge blow to the global racing industry. A whole slew of international matches were either called off or postponed due to the pandemic.
Chia acknowledged that he was also bewildered by the pandemic fallout, especially in the first half of 2020 when the global auto racing industry had come to a standstill and his team’s finances were weakened.
But as the year of 2020 has entered its second half, China and Macau have held the virus in check. The stability regained in these two places has been a key impetus for the nation’s motorsport business, which now Chia describes as “fully recovered”.
Despite having so much experience and so many championships, Chia has been humble about his success. He said he would be gratified if he could receive a trophy on the stage, no matter what his final standing is.
Being a first-timer on the Guia Circuit, widely considered the most difficult course in the world, Chia has to make sure that he and his team are well geared up for the formidable challenges of the route.
In terms of preparatory works, he and his team have dug into the video clips of the Macau Grand Prix over the past three years, from which they collected and analyzed the data of racers and their finishing times, in a bid to become more familiarized with the route that even he has not yet had a chance to zoom through.
What makes Guia Circuit, located at the southeast of Macau Peninsula, so difficult is that it is a street circuit with a total of 6.2km of narrow lane. It is spotted with a tricky combination of twists, turns and long fast drags. Acing the course necessitates a high degree of concentration, speed and competitiveness from the racer.
“The circuit literally allows no room for errors. As the lane is so slim, a small mistake can thrust you into fencing on either side, which would result in damage to the car and you being pulled out of the game,” he said.
Prior to the Macau GT Cup, which he will race with his Mercedes-AMG GT4, Chia will be given a chance to zip through the circuit in the free practice scheduled this Friday by the organizer.
He will be given two rounds of 30-minute trials on the route with all the other racers. Within the limited time, he is tasked with getting acclimatized to the road geography, inspecting it, and advising his team to make adjustments accordingly.
Chia’s team of 50 people – which is comprised of himself, another racer, Hao Wang, 20 or so technicians, 6 administrative staff and 10 of the team’s loyal followers – is sponsored by MGM in this year’s Grand Prix.
“It is a blessing to have an opportunity to race in a city that is virus-free, so that we don’t have to be distracted by the contagion risk and can center our focus on the practice,” Chia said. Staff Reporter