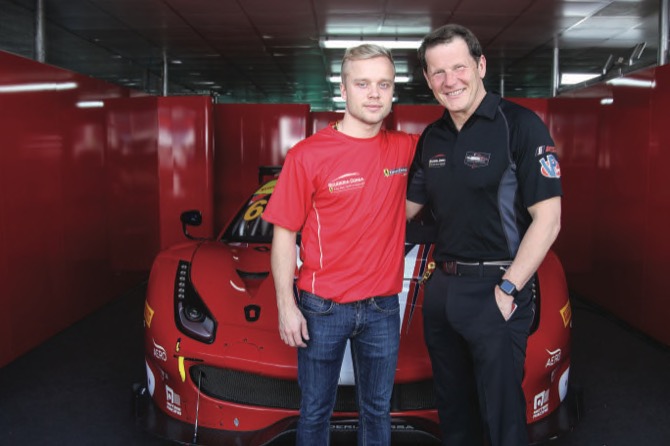 The US-based team “Scuderia Corsa” was founded in 2013 by Giacomo Mattioli and Art Zafiropoulo. The aim of the team is to strengthen the tradition of long term brand partnership with Ferrari dealerships. These dealerships are in the US, namely in Beverly Hills, Los Angeles and South Bay.Making its first appearance in the Macau FIA GT World Cup this year, the team presented as their driver for their one and only Ferrari 488 GT3 no one less than two-time F3 winner Felix Rosenqvist.

To learn more about the expectations of both the team owner and the driver for this year’s racing weekend, the Times interviewed Paddock Giacomo Mattioli and Felix Rosenqvist at the Macau Grand Prix.

Macau Daily Times (MDT) – What are the chances of “Scuderia Corsa” over this weekend?

Giacomo Mattioli (GM) – The chances are very good. I think Felix is the best driver out there; he has a lot of success on this track. For us it’s the first year so I’m sure there are some learning curves that we need to climb, but hopefully we will be ready for Sunday.

MDT – What would be a considered a good result?

GM – For sure we always want to aim for the win but a podiumfinish would be a great result for the first year.

MDT – What do you think about the new rules from FIA World GT Cup that restricts the competition to drivers with top licenses?

GM – I think that right now the grid that we have is one of the best possible grids in GT that you can have. I think the idea of Gold and Platinum drivers is fantastic and I think it was a good decision [from FIA].

MDT – Will this partnership with Ferrari continue? Can we expect to see more cars next year?

GM – Yes, for sure, we have had a close relationship with Ferrari through the dealerships for many years and hopefully we will bring more racing here to Macau. I don’t know yet [if we can bring more than one car next time] but we are working on it.

MDT – How does it feel to be back in Macau?

Felix Rosenqvist (FR) – Good! It’s a tradition for me to be here. It’s my seventh or eight time already and it would be strange not be here again. It’s almost like celebrating Christmas.

FR – That’s the big thing. It’s quite hard to know what to expect at this point because we haven’t done much testing (which happened in fact in another car, not exactly this one) and roughly that testing was about half an hour to forty minutes so today will be in fact the first time that I’ll drive this car but if the feeling is good we should be up there [in the classification table] but if you start struggling, obviously it is going to take some time to get into it.

MDT – What is your main goal for this racing weekend?

FR – Here in Macau you want to be able to maximize the car [capabilities], which is difficult since the track is very challenging. Obviously, I think in the first session I’ll have some learning to do, but my target is to come to the point that I can squeeze everything out of the car and hopefully at that time we will be good enough to fight for the podium. It’s also important not to have the [Practice] session stopped and to have some laps in to get some mileage. But it’s good that we aren’t one of the first sessions because when I drove F3 we usually are one of the first sessions and you are pulling up all the dust and the track is very slippery. It feels much better to start after a couple of sessions and after the track already has some rubber in.

MDT – In 2017 you have been focused on Formula E as well as Super Formula in Japan, how about 2018? Will you be aiming to continue this experience with GT cars?

FR – For the next year I’m sure to continue on Formula E. That part is already settled. We are going to start the season in two weeks in Hong Kong, then what I will do apart from that is not clear [yet] but obviously I would like to stay in Japan.

GT might be an option but to continue on Super Formula would also be a good program. Also WEC (FIA World Endurance Championship) could be a possibility but I think I would like to stay in Japan as now that I’ve come into that world and established some networks there and I had success so it makes sense to stay there. RM