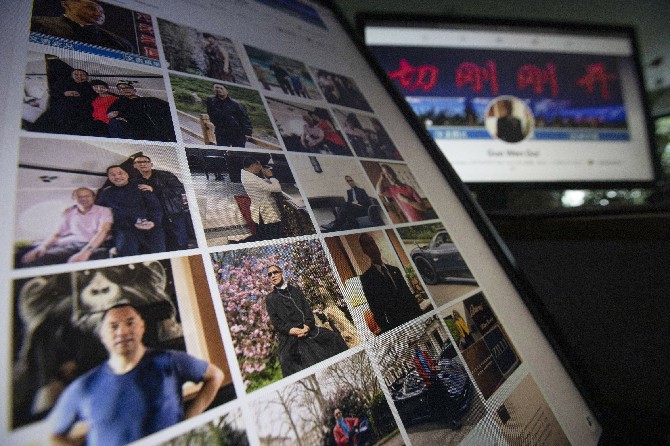 Three companies linked to a Chinese businessman who is a prominent critic of his country’s ruling Communist Party have agreed to pay $539 million to settle charges they conducted an illegal securities offering, according to regulators.
The New York- and Arizona-based companies linked to Guo Wengui raised $487 million from 5,000 investors who bought stock in GTV Media Group Inc. and a digital asset called G-Coins or G-Dollars, the Securities and Exchange Commission said yesterday [Macau time].
Guo, who lives in New York City, left China in 2014 during an anti-corruption crackdown led by President Xi Jinping that ensnared people close to the businessman, including an intelligence official. Chinese authorities have accused Guo, also known as Miles Kwok, of rape, kidnapping and bribery.
The companies were accused of failing to register the securities with regulators, according to the SEC. It said they sold stock and the digital asset through videos on GTV’s and Saraca’s websites and on YouTube, Twitter and other social media.
GTV and Saraca Media Group Inc. agreed to disgorge $434 million plus $16 million interest and to pay a civil penalty of $15 million each, according to the SEC. It said Voice of Guo Media Inc. agreed to disgorge $52 million plus $2 million in interest and to pay a civil penalty of $5 million. The SEC said the companies also agreed not to participate in any offering of a digital asset security.
“The remedies ordered by the Commission today, which include a fair fund distribution, will provide meaningful relief to investors in these illegal offerings,” said the director of the SEC’s New York office, Richard R. Best, in a statement.
A former civil servant turned real estate developer, Guo has rankled China’s ruling party by launching accusations of corruption on social media. His lawyer said in 2017 he had applied for political asylum in the United States.
Last year, Guo and Steve Bannon, a former political strategist for then-President Donald Trump, announced the founding of the “Federal State of New China,” an initiative to “overthrow the Chinese government.”
Guo was one of China’s richest businesspeople, with a fortune estimated by Forbes magazine at $1.1 billion in 2015. His current net worth is unclear. MDT/AP