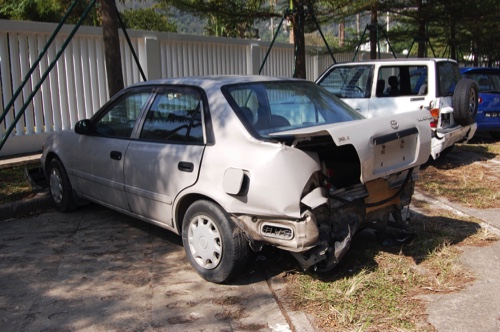 Beach-goers and residents in search of a moment of peace while enjoying the views of one of Macau’s seafronts at Hac Sa beach are often faced with the challenge of finding a parking space.  This situation, as reported by The Times last year, has failed to improve: Hac Sa beach’s public carpark is still being used as a dumping site for deserted vehicles.
Photos taken last weekend by an MDT reader show abandoned cars covered in pine needles, wrecked cars, and even vehicles with Transport Bureau notices on the windshields.
After being questioned by The Times on the matter, the Transport Bureau (DSAT) said it has paid close attention to carpark spaces occupied by the same vehicle for a long period of time and that it is planning to install parking meters preliminarily.
The bureau revealed that it notified the Public Security Police Force regarding cars parked there for a long time. PSP is now handling the 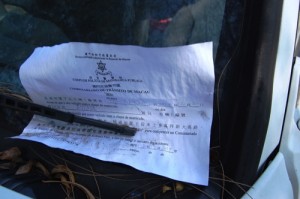 matter, DSAT said..
DSAT stressed it has been liaising with law enforcement departments, in addition to discussing the problem with local organizations, while conducting site inspections together. “In order to improve the parking discipline and ensure the rational use of public resources, we are planning to install parking meters preliminarily,” the bureau told The Times.
Georgia Creeden, a Macau resident who lives in a building near the Hac Sa beach, has been alerting authorities to this matter for the past year. “Some of the cars are wrecks and most of them have been there for months. Some of the cars belong to people who live in Taipa, who park their second car in Coloane free of charge and use it occasionally,” she told The Times.
Ms Creeden added that these residents “get calls from DSAT and then they move the car away for a couple of weeks” but later return to park the car in a different location at Hac Sa beach.
Last weekend, she counted a total of 80 abandoned cars in the beach parking area, namely two damaged vehicles, and two with DSAT notices on the windshields. “Approximately 45 percent of the parking spots are occupied by these cars,” she stressed, adding that she counted 30 abandoned cars in this location back in April.
In addition, she claims that abandoned cars can also be spotted along Avenida Luis Camoes next to the Hellene Garden building, where she counted 15 abandoned cars. 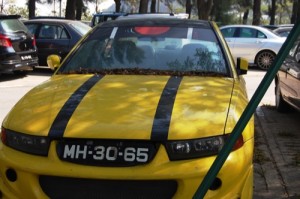 Ms Creeden believes that the issue could be solved if authorities installed parking meters.
She emailed DSAT April this year alerting authorities to a high number of abandoned cars parked for an extended period in the Hac Sa beach parking area. “Parking is limited at the beach because there are many ‘abandoned’ cars parked in spots that should be available to people who wish to enjoy the beach,” she wrote. “It is a pity that on holidays and weekends cars park illegally along the beach because there is no place else to park,” Ms Creeden continued.
In August, DSAT replied.  Following an investigation, they confirmed that some of the vehicles parked in the Hac Sa beach car parking area and along Avenida Luis Camoes did not hold valid taxi licenses. The bureau added that it would handle the matter in order to ensure the availability of parking spaces whilst continuing to monitor the use of the parking area.
“Regarding the installation of parking meters, we will take your suggestion into account for our future traffic planning,” DSAT wrote.
Ms Creeden also alerted DSAT to another worrisome situation: some residents have used the Hac Sa Beach carpark to park their second car without having to pay for two car parking spots elsewhere.
Replying to The Times’ enquiries, DSAT said that it would send inspectors to monitor whether owners of abandoned cars are moving the vehicles around the area despite receiving notification from DSAT. 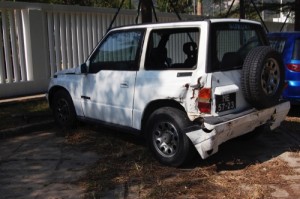 The bureau stressed that it has maintained close communication with the Public Security Police and parking meter management companies, often taking joint action to deal with abandoned cars and the illegal occupation of public parking spaces, “so as to reduce the unreasonable use of public resources.”
The Times reported on the issue of abandoned and wrecked vehicles at Hac Sa beach in April 2013. At the time, DSAT urged the public not to use public car parks as car dumps, as parking them in a public place and giving the department a notice of its position and relevant details is a simple solution.
When it comes to vehicles no longer in use, DSAT urged owners to apply for the cancelation of their vehicle at DSAT by presenting their ID card, original copy of vehicle’s registration card, vehicles disposal documents as well as the Property Registration Card, among others.
Lawmakers Jose Pereira Coutinho and Leong Veng Chai have recently submitted an enquiry to the government on a related matter. They have urged Macau’s administration to release a study it had commissioned on policies to recycle used cars. Legislators recalled that Macau and Guangdong had also been working on a regional cooperation plan to tackle the issue of older vehicles, seeking to reduce pollution and government’s expenses with the handling of these cars.