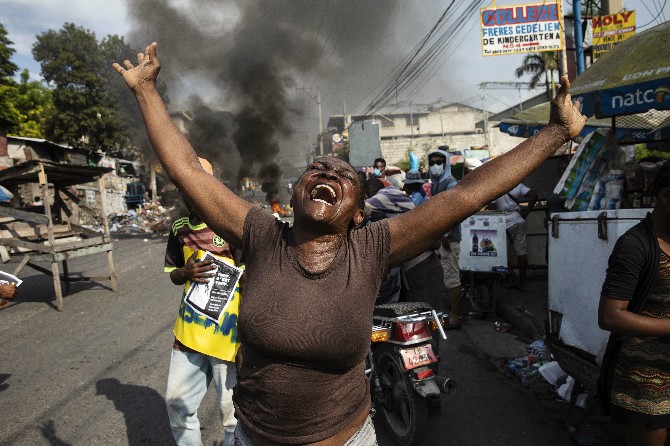 Haiti’s top diplomat implored the U.N. Security Council yesterday [Macau time] for help tackling gang violence and crime, saying the existing U.N. political mission needs to pivot toward strengthening security and law enforcement institutions in the crisis-wracked country.
“It’s vital to take account of the new realities that the country is facing and that the mandate is adjusted accordingly,” Foreign Minister Claude Joseph told the council after a summer of calamities in the Western Hemisphere’s poorest country.
President Jovenel Moïse was assassinated in July. A magnitude 7.2 earthquake killed over 2,200 people and damaged or destroyed tens of thousands of homes in August. U.S. border patrol agents’ treatment of Haitian migrants massed at the southern U.S. border sparked outrage last month.
Meanwhile, Haiti has been contending with escalating gang-related killings, kidnappings and turf wars. The U.N. says gang violence has forced 19,000 Haitians from their homes in recent months, with many living in makeshift shelters and unsanitary conditions.
Haiti’s National Police have been working to follow recommendations that U.N. policing experts made this summer, the U.N.’s Haiti envoy, Helen La Lime, told the council. But she said the force is “over-stretched and under-resourced.”
Haiti’s government “must implement a more holistic approach to addressing gang violence,” La Lime said.
Joseph, in turn, said officials need the U.N.’s Haiti mission to focus on supporting the government’s efforts in “security stabilization and the protection of civilians.” He didn’t list specifics.
The mission’s mandate, which is up for renewal this month, currently includes promoting police professionalism and supporting a national strategy to reduce violence. It also has a number of other goals, such as advancing electoral reforms.
The Security Council deployed a full-fledged peacekeeping mission in Haiti after a devastating 2010 earthquake. It was replaced in 2017 by a police mission, which was then replaced by the smaller political mission in 2019.
Joseph also appealed for the international community’s support on technical, financial and other matters.
Council members said Haiti needs continued support to find its way forward, though some also emphasized the country’s own role in doing so.
“It is ultimately up to the Haitian people themselves to bring the country out of his plight,” Chinese deputy Ambassador Geng Shuang said. He compared years of international aid efforts to giving someone a blood transfusion or oxygen that “has proven to be neither markedly effective nor sustainable.”
He and Russian deputy Ambassador Dmitry Polyanskiy also criticized the expulsion of more than 2,300 Haitian asylum-seekers along the U.S. border. Thousands of others were allowed into the U.S. temporarily to pursue their claims to stay.
Images of U.S. border patrol agents on horseback corralling the migrants stirred an outcry, the resignation of Washington’s special envoy to Haiti, an investigation, and a visit to Haiti and apology last week from a top American official.
“We are dismayed by the decision to forcibly return to Haiti those who cobbled together the totality of their means to leave Haiti in search of better lives for their children,” Polyanskiy said.
U.S. Ambassador Linda Thomas-Greenfield didn’t mention migrants or the border during her remarks to the council.
Joseph, the Haitian foreign minister, called the images from the border “horrific” and called for the migrants to be treated “with dignity and humanity.” He went on to note the U.S. apologies, praise President Joe Biden’s response and thank Mexico for its efforts to address migration issues. JENNIFER PELTZ, NEW YORK