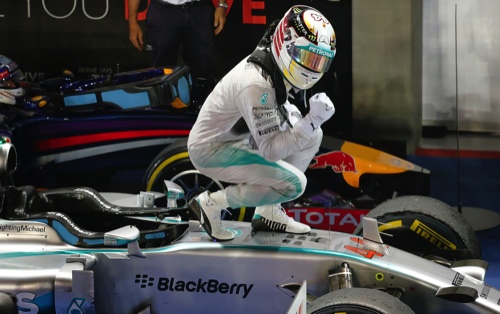 Lewis Hamilton took the lead in the Formula One drivers’ championship by winning the Singapore Grand Prix yesterday, leapfrogging teammate Nico Rosberg who had to retire early with a gear-selection failure.
Hamilton led comfortably but was forced into a late pit-stop, briefly giving up the race lead to Red Bull’s Sebastian Vettel, before he passed the German seven laps from the finish to win by 13.5 seconds at the Marina Bay circuit.
The Briton won his seventh race of the season, and second in a row, to move to 241 points, ahead of Rosberg on 238 with five races left.
Rosberg was forced to start from pit-lane due to an electronically caused gear-selection failure on the warm-up lap, and he did 14 laps at the back of the field in the stricken car before retiring.
“It would have been a hard-core race if Nico was in the race with me as the car was very strong,” Hamilton said.
Vettel finished second, just holding off Red Bull teammate Daniel Ricciardo, who moved to 60 points off the championship lead. Ferrari’s Fernando Alonso was fourth. Second to fourth places were separated by just 1.8 seconds.
Williams driver Felipe Massa was fifth, ahead of fast-finishing Toro Rosso driver Jean-Eric Vergne. Seventh through 10th places were fought out right until the final corner, with Sergio Perez of Force India seventh and his teammate Nico Hulkenberg ninth, while Ferrari’s Kimi Raikkonen was eighth and McLaren’s Kevin Magnussen 10th.
Hamilton led comfortably throughout, building a six-second lead over Alonso when the safety car emerged on lap 31 following a crash between Perez and Sauber’s Adrian Sutil.
Alonso pitted immediately onto the harder tire, putting him on the same rubber as Vettel and Ricciardo, and the lengthy six-lap safety-car period meant they elected to run to the end on those tires.
Hamilton, however, had to make another pit-stop as he had not yet used the harder tire, so once the safety car came in, he set about building his lead, trying to get it out to 27 seconds to enable him to pit and still emerge in front.
Though his tires did not have quite enough life to do that — getting his lead out to just over 25 seconds — he emerged from his stop behind Vettel, whose tires were very worn. The German was a sitting duck and Hamilton swept past easily to reclaim the lead. Chris Lines, Singapore, AP