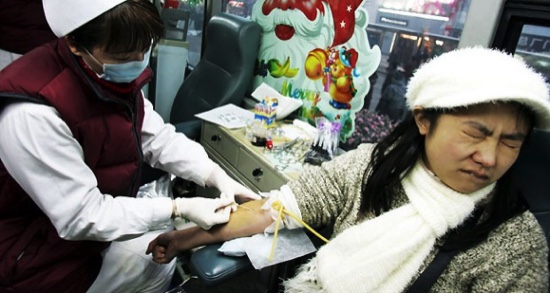 During the darkest days of China’s stock-market crash last summer, one drugmaker relentlessly defied gravity.
Shanghai RAAS Blood Products Co., a seller of treatments made from human blood plasma, rallied to new highs at a time when many of the country’s blue-chip firms were sinking. Now it’s China’s largest health-care company by valuation with a market cap of almost USD16 billion.
Its big driver of growth? China’s surging demand for plasma-based therapies, medicines made from blood components that are used during surgeries or for disorders like hemophilia, a condition in which blood doesn’t clot normally. Even though millions in China need these treatments, there’s a scarcity of the blood plasma used to make them partly because Beijing strictly controls the number of companies that have licenses to collect blood.
China tightened control over blood supplies after scandals in the 1990s when AIDS spread in central Henan province from farmers selling their blood to unregulated collection outfits. The government now restricts the number of new plasma collection facilities, making it harder for companies to ramp up supply. Meanwhile, demand keeps rising from a rapidly ageing citizenry that is increasingly wealthy and willing to pay for expensive and often life-saving blood therapies.
“Demand is estimated at between 12,000 and 15,000 tons of plasma each year, while China’s total plasma collection amount last year was about 5,800 tons,” Jay Chen, the company’s newly elected chairman said in an interview at its headquarters on the outskirts of Shanghai.
His company isn’t the only beneficiary of the strict regulations. Shares of Nasdaq-listed China Biologic Products Inc., another Chinese blood-therapy company, rose more than eight fold from the end of 2010 through 2015, a  windfall for private-equity firm Warburg Pincus LLC, its largest investor.
China is the world’s second largest market for blood therapies after the U.S. with sales of $2.5 billion in 2014 and that figure is estimated to reach $6.2 billion in 2019, China Biologic said in its annual report, citing data provider Marketing Research Bureau.
Shanghai RAAS’s stock has climbed about 10 fold over the last five years while revenue has quadrupled to reach 2 billion yuan ($309 million) in 2015. Fewer than 30 companies in China have licenses to make blood-based therapies, and as the products are derived from the blood of healthy people there is a constant race to get control of new plasma collection stations. At these outlets, scattered across the country, donors are paid a fee of a couple hundred yuan when they give plasma.
Shanghai RAAS’s advantage: it has the largest number of plasma collection centers in the country, 33 out of China’s total of about 200. This year the company hopes to add another ten. “New plasma station approval is highly regulated, the government may not necessarily approve, but the company’s plan is ten,” said Chen.
The National Health and Family Planning Commission, which oversees the health-care industry, did not respond to a fax seeking comment on the blood therapy market.
The company was started in 1988 jointly by Rare Antibody Antigen Supply Inc. (RAAS) which was founded by Vietnamese-American businessman Kieu Hoang and a local government-backed blood products company.
While strict regulations have so far aided many blood product companies, it could also turn into their biggest crisis. In earlier years, in the country’s poorer regions meager fees were enough of an incentive to attract blood plasma donors, but fewer are likely to do so as incomes rise, said Shi Lichen, manager at Beijing Dingchen Medical Consultancy, an advisory firm.
“If blood collection becomes more and more difficult, their operations will face problems,” he said. The plasma industry is unique because raw materials are hard to obtain in China, but the sharp ascent of Shanghai RAAS’s stock also suggests it has drawn a lot of speculative interest from shareholders, he said, noting that companies making other types of medicines are trading at far lower valuations. The second largest pharmaceutical company in China by market cap, Jiangsu Hengrui Medicine Co., trades at 42 times earnings, compared with about 75 times for Shanghai RAAS, according to data compiled by Bloomberg.
Local companies also face foreign competitors who are developing more efficient technologies to lower costs of products like albumin, a blood protein that can be imported, according to Shi. Among the international companies importing the protein are CSL Behring, Baxter International Inc., Grifols SA and Octapharma AG, according to ResearchInChina, a market researcher.
Chen, the plasma company’s chairman, says its valuations are backed by a highly lucrative business and its main shareholders have been increasing their stake in the company.
“Because of the supply and demand relationship, this industry has relatively high gross profit margins of about 70 percent,” he said. Bloomberg