Here are the possible candidates to succeed as HK leader

Speculation again is swirling about possible successors to Hong Kong leader Carrie Lam after the Financial Times reported that she could be out by March. While officials in Beijing would hope the city’s next leader could quell months of unrest, that remains uncertain. Protesters’ demands go beyond calls for Lam to resign to include systematic change that would allow the city to nominate and elect its own leaders. Here are several possible contenders that have appeared in press reports, most of whom didn’t respond to requests for comment: 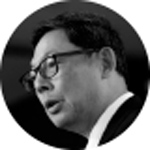 Norman Chan, 64, who stepped down as head of Hong Kong’s de facto central bank in September after a decade, is seen as an apolitical bureaucrat favored by the city’s financial elite. Chan started his career as a public servant under British colonial rule. While he helped steer the city through the global financial crisis, defended the currency’s peg, and managed property downturns, he also oversaw the city’s finances during a period where affordability for first-time home buyers has plummeted. He has also previously served as director of the Chief Executive’s Office and as a regional vice chairman for Standard Chartered Plc. 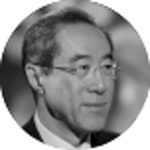 Henry Tang, 67, served as Hong Kong’s No. 2 official through the global financial crisis and ran the city’s finances for almost four years before that. The son of a textile tycoon, Tang is a Standing Committee member of the Chinese People’s Political Consultative Conference, a national advisory body, meaning he has strong support from Beijing. His quest for the chief executive’s role in 2012 failed after scandals including an unapproved basement extension at his home to house an extensive wine collection. He denied any wrongdoing. Tang’s office declined to comment on the FT report yesterday. 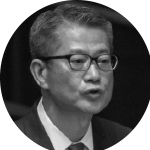 Paul Chan, 64, is currently spearheading economic policy in Lam’s administration. An accountant by training, he previously served as a member of the Legislative Council and secretary of development. Chan this week introduced a HKD2 billion ($255 million) package of relief measures to counter an economy facing recession. He has also been linked to a number of scandals, including one related to his wife’s ownership of illegally subdivided properties and making libelous statements against international school students. He denied any wrongdoing. Chan’s office also declined to comment on the FT report. 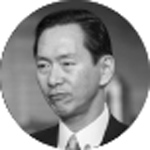 Bernard Chan, 54, has served as the convener of Carrie Lam’s cabinet since leading her election campaign in 2017. He’s worked with all of the city’s chief executives since the former British colony’s return to Chinese rule in 1997 and also served as a deputy to the National People’s Congress, China’s legislature. Chan began his career as a New York investment banker and serves as president of Asia Financial Holdings Ltd., a Hong Kong-listed investment firm. Before the protests in March, he told Radio Television Hong Kong that he wouldn’t run. He reiterated in an interview last month that he never wants a “full-time” government job. 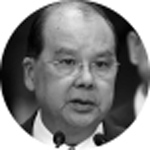 Matthew Cheung, 68, is Hong Kong’s current No. 2 official and manages the city’s affairs when Lam travels outside the city. He has worked in public service since the 1970s, including serving as the city’s labor and welfare chief. He could end up serving as an interim chief executive if Lam were to resign, a role he could keep for six months before the city’s 1,200-member Election Committee picks a new leader. He lacks the broad experience of predecessors, and Lam last year was forced to deny local media reports that she was considering replacing him. 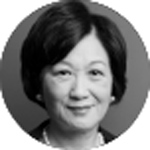 Regina Ip, 69, is a member of the Legislative Council and Lam’s advisory Executive Council who failed to get enough nominations to run for chief executive in 2017. Ip, who has been a public servant since 1975, was the first woman to be appointed secretary for security. Despite her role in the pro-Beijing camp and her frequent editorials against the city’s protesters, she has also been one of the most outspoken critics of Lam’s tactics. She became a contentious figure in the city’s politics more than a decade ago after advocating for the passage of national security legislation, known as Article 23, which prompted a similar period of mass demonstrations and executive resignations.