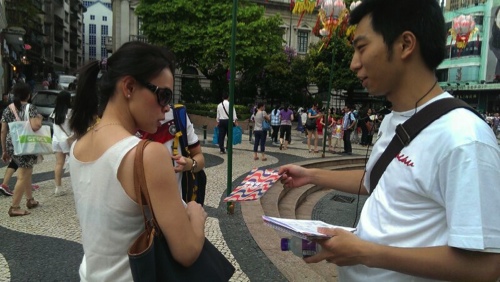 The Macau government has been trying to divert visitors to areas within the city that were previously unpopular with tourists. Some pointed out that this measure, which aims to reduce pressure on traditional tourist areas such as the Ruins of St Paul’s, may compromise the living space of local residents.
The Macau Heritage Ambassadors Association (MHAA)’s chairman, Derrick Tam Chi Kuong, said that Macau should consider the lengths it is willing to pursue to promote tourism.
He also urged the government to improve its urban planning procedures and to put more effort into preserving the areas near cultural heritage buildings.
The MHAA chairman was among the delegates that travelled to Portugal in July to discuss and exchange ideas relating to cultural heritage preservation with Portuguese officials.
He told the Times that during the trip, he visited a Portuguese town called Óbidos, which he said is dedicated to tourism. The town is famous for its well-preserved medieval architecture and a series of tourism events such as a medieval market, which made it a popular tourist destination.
“It is obvious that this place is for tourism when you [arrive] there, [a place] for people to shop and visit historical buildings (…) It is worthwhile for us to reflect on how much we are going to sacrifice for tourism,” he said.
Derrick Tam gave the example of the São Lázaro district, saying that it is more likely that residents’ living space in that area will be reduced, rather than integrating tourism into the daily lives of residents.
“I am not saying that I do not support the MSAR government’s policy to channel tourists because I think it is good for the tourism capacity of Macau. However, we have to consider the residents there as well and avoid squeezing away the elements that are related to residents’ daily life,” he said.
Moreover, Derrick Tam pointed out that many Portuguese cities have preserved the view of the old districts and have a better plan for utilizing space compared to Macau.
“Macau has been developing rapidly in recent years, with many skyscrapers constructed. We have to think about the height limits of buildings outside the historical area.”
The chairman pointed out that Macau still lacks a master plan for urban planning. Therefore, the planning of different areas is conducted separately, which may contribute to inconsistent urban planning and cannot effectively protect the heritage buildings in Macau.
Furthermore, Mr Tam said that the government should pay attention to the preservation of aged buildings that are not included on the cultural heritage list.
He mentioned the controversy that took place at the beginning of this year involving an old building on Rua da Barca, which was in the process of demolition until the authorities suspended the demolition permit amid public backlash. “This type of building is an issue that the government needs to deal with more quickly,” he said.
Although the government is currently conducting a survey on cultural heritage, Derrick Tam said that the survey cannot tackle the issue immediately. Therefore, he has urged the authorities to come up with provisional measures and bring buildings that are considered worthy of preservation to the cultural heritage committee for discussion, so that they can be added to the cultural heritage list as soon as possible.
Additionally, the MHAA chairman has spoken about the development of the association. He suggested that the heritage ambassadors of the association are not only involved in activities like providing services to residents and visitors, but have also participated in events that include artistic elements.
“This means that the works on [promoting] cultural heritage is not only to talk about buildings. It can also become artistic events. This has also attracted young people who launch arts events alongside the [cultural heritage] promotional event. Through them, more volunteers are attracted to join us and become one of us,” he said.
Derrick Tam revealed that his association plans to enter schools to organize activities such as classes and tours, in order to teach the next generation the importance of protecting their cultural heritage.