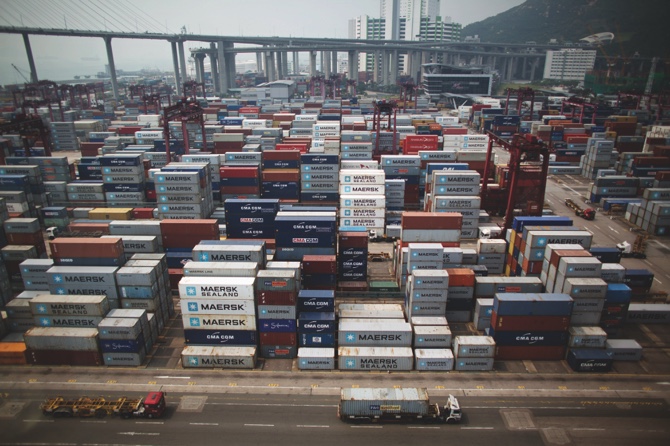 Hong Kong’s exports rose in December, snapping a 13-month streak of declines that was the longest since 2016 as agreement on a U.S.-China trade deal helped stabilize trade across Asia to close out the year.
Exports expanded to HKD351.3 billion during the month, up 3.3% from a year ago, according to a government release. Imports fell 1.9% to HKD383.8 billion, and the trade deficit widened from the previous month to HKD32.5 billion. For the year, Hong Kong’s exports fell 4.1% – their biggest annual decline since 2009 – while imports contracted 6.5%.
The U.S.-China trade war weighed on the territory’s economy in the first half of the year, before political protests that began in June tipped the economy into recession. In October, exports plunged by the most since 2016.
“Looking ahead, Hong Kong’s export performance is still subject to high uncertainties in the near term,” a government spokesman said in the release. “While global economic conditions showed some signs of stabilization in the latter part of last year, partly helped by reduced trade tensions between the U.S. and the mainland, external uncertainties are still high.”
Optimism that an initial trade deal the U.S. and China, signed in mid-January, would spark a revival at the city’s ports will likely be tempered by fallout from the ongoing coronavirus outbreak and containment efforts in both Hong Kong and the mainland.
The virus outbreak is of special concern, “as it may weigh on economic performance of some Asian economies and disrupt economic activities in Hong Kong,” the spokesman said.
December’s gain in exports was mainly due to an increase in shipments to mainland China compared to a low statistical base. Exports to the major advanced economies remained weak, and those to other major Asian markets were mixed, according to the release. MDT/Bloomberg