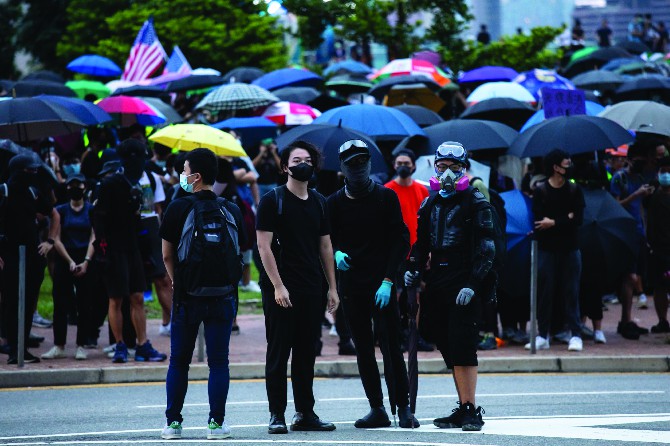 Prominent activist Ventus Lau stood outside a restaurant this week, handing out surgical masks and asking recipients to shout pro-democracy slogans – including the popular rallying cry “Liberate Hong Kong! Revolution of our times!”
For Lau, who has organized some of the biggest anti-government protests since they began last June, the demonstrations are on hold as fear of a new coronavirus in neighboring China keeps the city’s 7.4 million residents avoiding large crowds. But he says frustration over the government’s handling of the public health crisis will fuel even more support for the protest movement after the virus scare subsides.
“It’s hard to separate the protests and the epidemic – they are in the same vein,” said Lau, who like other protest organizers sees the disease as a new front in the broader struggle for more democracy. “The battle against the virus has helped us see the government’s incompetence and the failures of our system.”
Hong Kong’s protests erupted in June of last year in opposition to a since-scrapped bill allowing extraditions to mainland China. Even before coronavirus cases began emerging in recent weeks, the financial hub’s economy fell into recession after months of violent clashes between riot police and protesters.
The frequency of larger-scale protests began subsiding after a landslide win for pro-democracy forces in last November’s district council elections, followed by the Chinese New Year holidays and now the virus scare. There have only been two major rallies – in early December and on New Year’s Day – in the last two months, compared with regular protests at the height of the movement.
Isolated protests took place away from the city center late Saturday night, where wooden boards, bicycles and other objects were used to block roads in the vicinity of Sheung Tak Estate, Tseung Kwan O. Bricks were thrown at police officers, the government said, prompting the use of tear gas and pepper spray to disperse crowds. Police said 60 people were arrested.

Reassessing tactics
The broader pause has prompted protesters to reassess their tactics to meet their key demands, including an independent inquiry into police abuses and meaningful elections. That has been on display in the past few weeks with the rise of pro-democracy unions, including one by medical workers calling for the city to seal off the mainland border, as well as organizing ahead of September elections for Hong Kong’s powerful Legislative Council.
Many in the protest movement are also registering voters for the city’s so-called “functional constituencies,” seats in the legislature allotted to industry groups, according to veteran activist and former professor Joseph Cheng.
“This is going to be a very important aspect of the movement – you can’t organize large-scale protests activities because people obviously have to stay home” amid the outbreak, Cheng said. But he said the new limitations it imposed wouldn’t stop the movement.
“The resentment certainly has been building and spreading,” he said. “People are trying to find ways to express anger against the government despite the virus.”

‘Mishandled the virus’
The current outbreak – and reports that it was covered up by Communist Party officials – has struck a deep chord with many in Hong Kong, where the protests were driven by a deep distrust of China. The city also has vivid memories of Beijing’s cover-up of 2003’s outbreak of severe acute respiratory syndrome, or SARS, which killed almost 300 people in Hong Kong and crippled its economy.
Hong Kong’s government has come under fire for a shortage of surgical masks, choosing quarantine sites close to residential areas and a failure to quickly and fully shut its border with the mainland. Residents have struggled to buy key staples, from rice to toilet paper, due to panic buying that retailers and the government say is unwarranted. “Rumors are like viruses” Chief Secretary Matthew Cheung wrote in his weekly blog yesterday, urging people to ignore malicious commentary that could promote confusion and panic.
“Ridiculous” prices for face masks should be curbed by the government, according to Jeffrey Lam, a member of Hong Kong’s advisory Executive Council, Radio Television Hong Kong reported. “Hong Kong people cannot afford HKD2,000 ($257) a box,” he said.
“The government has mishandled the virus,” said Joshua Wong, one of the city’s most well-known democracy campaigners. “In the short term, it will reduce the number of protests. But over the long term it will just encourage more moderate, maybe even pro-Beijing people, to come out and criticize the government over things such as the shortage of surgical masks.”
Residents in areas that have quarantine centers or where they are planned have held demonstrations in the past couple of weeks.
Yesterday, rallies were held in two New Territories towns over quarantine centers, RTHK reported. Several people were detained and one man was hospitalized with head injuries in a demonstration in Sai Kung against a holiday camp being turned into a emergency medical facility, according to the report.
In the eastern district of Tai Po, dozens of people gathered to object to a proposal to use a local clinic for patients with mild symptoms of the coronavirus, RTHK said. There have been similar protests in the districts of Mei Foo and Fanling, according to the report.

Evolving protests
With tourism down and the retail sector hurting as people stay home and avoid shops and malls, there’s a strong likelihood of more layoffs and economic pain. Flag carrier Cathay Pacific Airways Ltd. requested that almost 27,000 employees take three weeks of unpaid leave.
That could focus more anger against increasingly unpopular leader Carrie Lam’s administration, said Wayne Chan, 29-year-old graphic designer, frontline protester and convenor of the Hong Kong Independence Union.
“In the coming future, there will only be more people losing their basic way of life and the government will become their punching bag,” he said, while noting that “the risk of protesting has gone up” at a time when there is a deadly outbreak.
At the end of the day, the movement is about Hong Kongers’ ability to protect themselves, said Eric Lai, vice convenor of the Civil Human Rights Front, which organized some of the city’s largest demonstrations.
“The slogan we have now among the community is ‘Recover Hong Kong, resist the virus of our times,”’ he said. The disease-prevention movement is part of a larger one “using civil society as a platform to keep people from the coronavirus. Whether it’s opposing the anti-extradition bill, resisting police brutality, it’s all about protecting ourselves.” Iain Marlow & Natalie Lung, Bloomberg