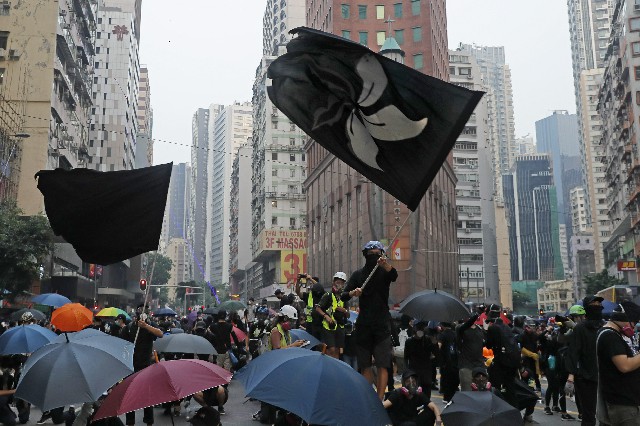 Protesters wave a black version of the Hong Kong flag

Chinese President Xi Jinping stressed national unity and said relations between Hong Kong and the mainland would improve, even as pro-democracy protesters planned several rallies to coincide with anniversary of Communist rule.
“Hong Kong and Macau will be able to develop together with the motherland’s interior,” Xi said in a brief speech to a banquet in Beijing ahead of tomorrow’s holiday marking 70 years since the founding of the People’s Republic of China. “Tomorrow will be even better.”
Xi said the “one country, two systems” principle under which Hong Kong has been governed since its return from British rule in 1997 must be upheld. The president’s remarks – his most extensive comments on Hong Kong since unrest began in June – came as the city braced for another wave of protests during the National Day holiday.
Demonstrators on Sunday set a subway station entrance ablaze and threw petrol bombs at police as tens of thousands tried to march on Hong Kong’s central government offices ahead of the National Day holiday. They were met by officers who deployed rounds of tear gas and a water cannon to disperse them for a second straight day.
The unrest disrupted some services in Hong Kong’s city center, with rail operator MTR Corp. temporarily closing some downtown stations. Hong Kong police said they arrested 146 people and fired off 328 rounds of tear gas on Sunday. Forty-eight people were sent to the hospital, authorities said.
The violence has threatened to mar Xi’s Oct. 1 celebrations in Beijing, which will be marked by “mass pageantry” in which at least 100,000 people will take part. The festivities will include a military parade and an evening gala in Tiananmen Square.
Xi and other party leaders visited the remains of former leader Mao Zedong and attended a ceremony to pay tribute to deceased national heroes in the square on Monday morning, according to the official Xinhua News Agency.
Chief Executive Carrie Lam will lead a delegation to Beijing to participate in celebrations, meaning she’ll be out of the city during the holiday. She will return to Hong Kong in the evening via the border city of Shenzhen, and the city’s No. 2 official, Matthew Cheung, will be its acting leader in her absence.
Hong Kong’s government canceled the city’s annual National Day fireworks on the waterfront, citing safety concerns, and banned a planned rally by major pro-democracy organizer, the Civil Human Rights Front. The group’s appeal was denied by authorities on Monday, its co-convener Jimmy Sham said.
Demonstrations have rocked the Asian financial hub since early June, triggered by proposed legislation allowing extraditions to China and since morphing into a broader push back against Beijing’s grip.
Lam, who had tried to push the bill through before protests erupted, assumed responsibility for the “entire unrest” as she held her first community dialogue event last week – a bid to assuage demonstrators ahead of Oct. 1.
Tomorrow’s rallies have been planned in six districts that have seen some of the most violent protests of recent months, with most set to start in the afternoon. Spectators for a morning flag-raising ceremony in the city center will be moved indoors.
Activist and protest organizer Ventus Lau was arrested Monday morning for alleged offenses including criminal damage and trespassing in the the city’s Legislative Council chamber — which was broken into by protesters on July 1 – a friend told Lau’s media WhatsApp group. Local actor Gregory Wong was also arrested on similar charges, activist Nathan Law wrote on his Facebook page.
At one point during scuffles outside a subway station in the Wan Chai area Sunday, an officer fired a warning shot into the sky.
“Some police officers were surrounded and attacked by a large group of violent protesters,” the Hong Kong police said. “With their lives under serious threat, an officer fired one warning shot into the sky to protect their own safety.” Natalie Lung & Peter Martin, Bloomberg