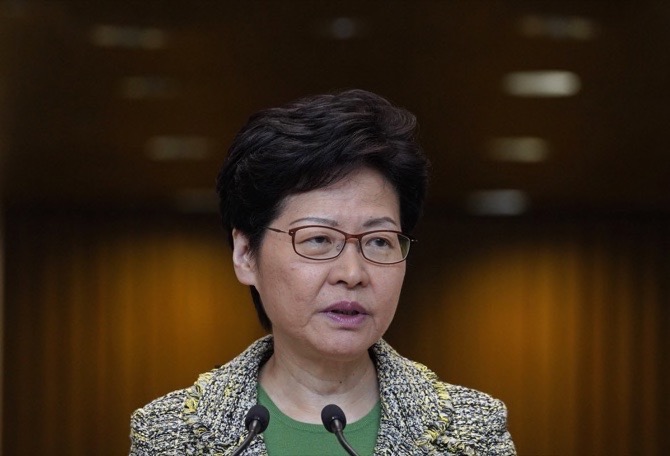 Hong Kong leader Carrie Lam said yesterday she doesn’t expect a town hall meeting this week to find answers to the months-long pro-democracy protests but hopes it will be a step forward in the “long journey” to reconciliation.

Lam said she is encouraged that more than 20,000 people have signed up for Thursday’s community dialogue, out of which only 150 will be selected randomly. It will be the first such meeting since the protests started in early June.

The Beijing-backed leader is hoping to tone down increasingly violent protests that are an embarrassment to China’s ruling Communist Party ahead of Oct. 1 celebrations of its 70th year in power.

The unrest was sparked by an extradition bill that has since been withdrawn, but protesters have widened their demands to include direct elections for the city’s leaders and police accountability.

Lam said there is no agenda for the town hall, which is meant as an open platform for the public to vent their grouses and find a way out of the conflict. She said the two-hour session will be considered a success if the dialogue is peaceful with a frank and candid exchange of views.

“It would not be possible for a consensus to be reached after all these tensions in society that we have seen,” Lam told a news conference. “To me, this is one step forward. It will be a long journey to achieve reconciliation in society, let alone to return to the more normal Hong Kong that we are all very familiar with.”

Security is expected to be tight at the town hall meeting, which will be held at a stadium in Hong Kong’s Wan Chai neighborhood. Participants will be banned from bringing items including umbrellas, gas masks or helmets — tools used by protesters.

Lam acknowledged that she and her colleagues might not be welcomed by the public. On Sunday, police had to rescue Secretary for Constitutional and Mainland Affairs Patrick Nip after an angry crowd surrounded his car as he was leaving a public event.

“If our reaching out is a source of major tension, then we have to think twice whether we should do that,” Lam said.

More than 1,500 people have been arrested since the protests started. The demonstrations, carried out in various forms, from peaceful human chains to mass singing in malls, usually peak during weekends and turn violent late in the day, with protesters setting street fires and vandalizing public utilities, forcing police to fire tear gas and water cannons.

This past weekend, some protesters also trampled and burned Chinese flags.

Lam backed Hong Kong’s police force amid public criticism over its alleged use of force, saying it was “quite remarkable” by international standards that no one has died in the protests.

“You ask me when that sort of restraint will disappear, I really can’t tell you,” she said, reiterating her call for violence to stop. AP