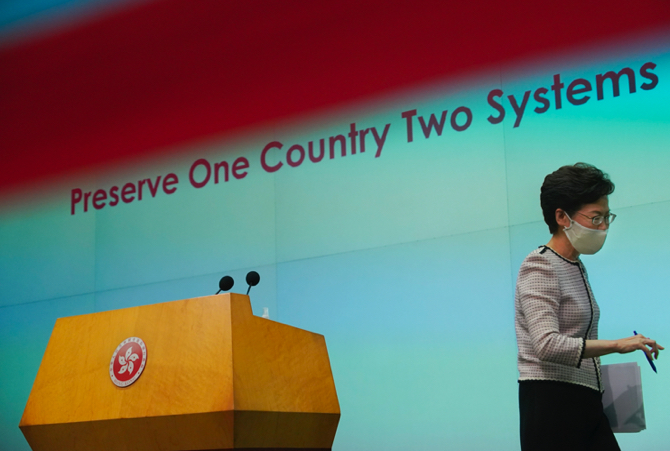 Hong Kong’s leader acknowledged that she still hasn’t seen a full draft of China’s pending national security legislation, even though the measure could be handed down in a matter of days.

Officials in the Asian financial center have defended the controversial law based on details published by Chinese state media, Hong Kong Chief Executive Carrie Lam told a weekly news briefing yesterday ahead of a meeting of her advisory Executive Council. Still, Lam continued to insist that the final version wouldn’t fundamentally diminish the “high degree of autonomy” promised to Hong Kong before its 1997 return to Chinese rule.

“We have not seen the complete details of the proposed legislation,” she said. “We were commenting on what we have seen.”

On Saturday, China published fresh details of the sweeping new security law that President Xi Jinping’s government is imposing on the former British colony in the wake of historically large and sometimes violent pro-democracy protests last year. The law is being drafted by China’s top legislative body in Beijing and could be handed down as soon as next Tuesday.

The proposed security law has alarmed opposition politicians and activists in Hong Kong, as well as a number of Western democracies – including the U.S., which has threatened retaliation. The Trump administration said it would revoke the city’s special trading status under U.S. law, if China went forward with the plan.

The national security legislation – announced by the National People’s Congress on May 21 and approved days later — aims to punish acts of secession, subversion, terrorism and collusion with foreign forces. The NPC’s decision-making Standing Committee started deliberations on the draft Thursday, with the official Xinhua News Agency publishing details on Saturday.

The Standing Committee could announce its final decision as soon as next week, although the matter wasn’t yet on the public agenda for a special interim session set to end June 30.

The latest details clarify that the legislation would override Hong Kong’s own laws if there was a conflict, with some cases even being prosecuted by the central government. The law would also allow Chinese spies to operate in the city, create new divisions within Hong Kong’s government to administer its provisions and let Lam pick judges to hear particular cases.

On Monday, the International Chamber of Commerce-Hong Kong joined those urging the NPC and Lam’s government to open a public consultation on the legislation. “We believe the drafting process of the law should be transparent and provide opportunity for the people in Hong Kong to offer comments as they are those affected,” the chamber said a statement Monday.

The way in which the legislation was being prepared breached important values and freedoms expected under Hong Kong’s “one country, two systems” governing framework, the ICC-HK said, adding that there was “considerable cause for further concern that it could be the precedent for further breaches in the future.”

Yesterday, Lam said the law was consistent with Hong Kong’s Basic Law, which guarantees rights and freedoms not similarly protected on the mainland until at least 2047. She said the legislation wouldn’t abolish Hong Kong’s freedoms of speech, press or assembly.

Lam also rejected arguments that newly announced provisions empowering her to appoint judges to national security cases would undercut the Basic Law’s guarantee that the courts will be able to “exercise judicial power independently, free from any interference.” She said all of Hong Kong’s judges were independent, and that there would be a pool of judges available to hear such cases.

The 15 foreign judges now on Hong Kong’s top court wouldn’t necessarily be barred from hearing national security cases, Lam said, adding that jurists would be picked based on their credentials. “The chief executive is not just going to appoint anyone on the street to be a judge,” she said. Iain Marlow & Natalie Lung, Bloomberg