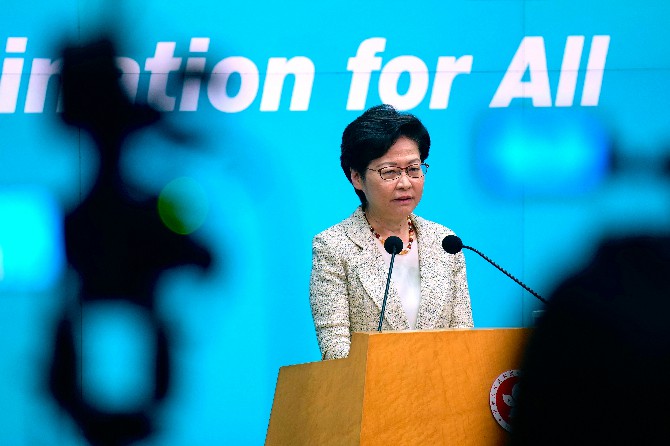 Hong Kong’s leader said yesterday that elected district councilors will still need to take an oath pledging allegiance to Hong Kong despite the resignation of dozens of councilors who are refusing to do so.
Some 170 district councilors, most of them supporters of the semiautonomous Chinese territory’s beleaguered pro-democracy movement have resigned in the past week rather than take the oath following media reports that they may have to repay their wages if they are later disqualified from office.
The requirement that the city’s more than 400 district councilors take the oath was introduced after a bill was passed in May. Previously, only lawmakers and government officials were required to take the oath and pledge allegiance to Hong Kong and the government.
A national security law imposed by Beijing last year has led to the arrest of many of the city’s prominent pro-democracy figures, including Joshua Wong and media tycoon Jimmy Lai. A majority of such activists are currently behind bars or have fled abroad.
Hong Kong leader Carrie Lam said at a regular news conference yesterday that she is sure that given the security law, each district councilor will gauge their past behavior to check if they have “crossed a line.”
“Individual incumbent district councilors of their own accord took some actions after seeing that there are certain legal requirements, that is, legal liabilities will have to be borne if they have violated certain rules and regulations,” Lam said. “They decided to resign. This is out of our control.”
Lam said that despite the exodus of district councilors, authorities will press on with the oath-taking because they “have to implement the law.”
Hong Kong’s district councilors largely take care of municipal matters such as organizing community building activities and ensuring that public facilities are in order. Their election has taken on greater importance, however, since Hong Kong was rocked by pro-democracy protests for much of 2019. Zen Soo, Hong Kong, MDT/AP

Carrie Lam, chief executive of the Hong Kong Special Administrative Region (HKSAR), Monday called on the public to give young people proper guidance, help them develop positive values, strengthen their sense of national identity so that they can become pillars of the country and Hong Kong.
Lam made the remarks at the prize-giving ceremony of 2021 Hong Kong Outstanding Teens Election organized by Hong Kong Playground Association, a local non-governmental organization.
She said that the HKSAR government has been striving to create a safe and favorable environment for the development of young people, allowing them to focus on their studies and grow up healthily.
Furthermore, the HKSAR government will continue to support non-governmental organizations to hold activities beneficial to the young people’s body and mind, and to nurture them into future masters of the society with a sense of national identity, an affection for Hong Kong as well as an international perspective, she added. MDT/Xinhua