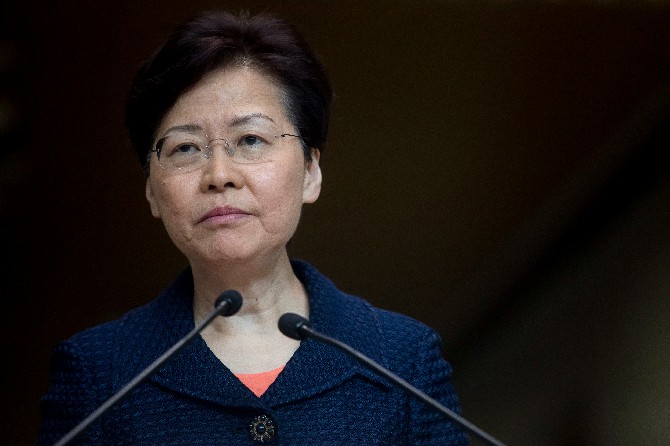 Hong Kong announced plans to ban gatherings of more than four people and close cinemas, gyms and arcades, after the Asian financial center recorded its largest one-day surge in coronavirus cases.
Among the measures that took effect yesterday, the city has asked restaurants to reduce their capacity by half. The measures at eateries also require them to keep tables at least 1.5 meters apart, limit seatings to four people per table and enact temperature checks for those entering.
The gyms, movie theaters and arcades were closed from 6 p.m. Saturday. Weddings and funerals will be exempted from the limits on gatherings for now.
Chief Executive Carrie Lam also reversed course on a controversial and confusing move to ban alcohol sales, saying she had only “suggested” such a move.
Lam said she understood that the measures would mean another blow to local businesses. “But for the sake of public health and the fight against the virus, we must take this step,” she said.
She added that Hong Kong’s government would discuss further virus relief measures with businesses and ask employers to not cut staff.
In the last two weeks, hundreds have rushed back to Hong Kong in part to avoid a March 19 government deadline that subjected all international arrivals to a 14-day self-quarantine.
A spike in recent cases has alarmed the local government and residents after the spread of Covid-19 had largely been contained over the last two months, even as the pathogen spread rapidly in Europe and the U.S. Hong Kong, like other regional governments from Japan to New Zealand, has rushed to contain a fresh wave of cases from residents returning from abroad. MDT/Bloomberg