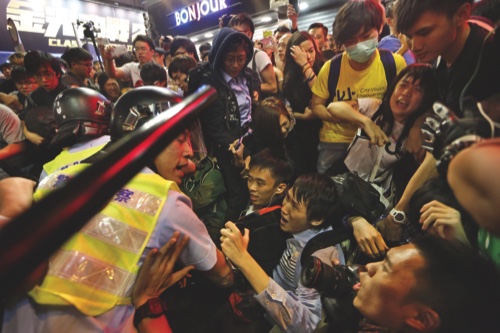 Hong Kong police arrested 11 more people in a second night of scuffles with demonstrators angry at having their 2-month-old pro-democracy protest camp in a volatile neighborhood shut down, officials said yesterday.
Police also said they arrested seven of their own officers for assault in connection with the Oct. 15 beating of a handcuffed protester during a violent nighttime clash.
None of the seven officers were identified. There was public anger when they were caught on camera apparently kicking and punching the protester in a dark corner of an underpass where hundreds of police were battling activists.
In a statement, police denied accusations that their failure to immediately arrest them meant they were delaying the case. Police said they were continuing to investigate and collect evidence.
The latest arrests of the activists followed an aggressive operation by authorities to clear out the protest camp on the busy streets of the crowded Mong Kok district, one of three protest zones around the city. Police are already holding 148 people who have been detained since Tuesday, including high-profile student leaders Joshua Wong and Lester Shum.
Wong, 18, heads the Scholarism group, while Shum, 21, is second-in-command of the Hong Kong Federation of Students. The groups have played important roles in organizing the protest movement seeking free elections in the former British colony.
The clearance of the Mong Kok camp deals a blow to the movement, which has had little to show after two months of occupying Hong Kong streets although the arrests of the popular student leaders could also erode public support for authorities.
Police officers lined roads, and were last night stopping and searching people in the area and noting their identity-card numbers. About 6,000 officers will be assigned to Mong Kok district until Sunday to prevent reoccupation, the South China Morning Post reported yesterday.
Sporadic skirmishes occurred Wednesday night as protesters sought to retake roads in the densely-populated entertainment and shopping district, only to be fended off by police. Holding Mong Kok will add to signs that the Hong Kong government is starting to end two months of demonstrations that were sparked by Beijing’s decision to screen candidates for the 2017 election of the city’s chief executive.
“If anyone attempts to block the reopened roads or other sections of roads, or to disrupt public order, police are duty bound to take resolute action,” Chief Superintendent Hui Chun-tak said at a briefing Wednesday.
Protesters are under increasing pressure as the police enforce court orders to clear occupied sites, public support wanes and China refuses to give in to their demands. Demonstrators are still camped in hundreds of tents at Admiralty district, the main site.
The protesters are demanding that Hong Kong’s government scrap a plan by China’s Communist leaders to use a panel of Beijing-friendly elites to screen candidates for the territory’s top leader in inaugural 2017 elections. Kelvin Chan, Hong Kong , AP/Bloomberg