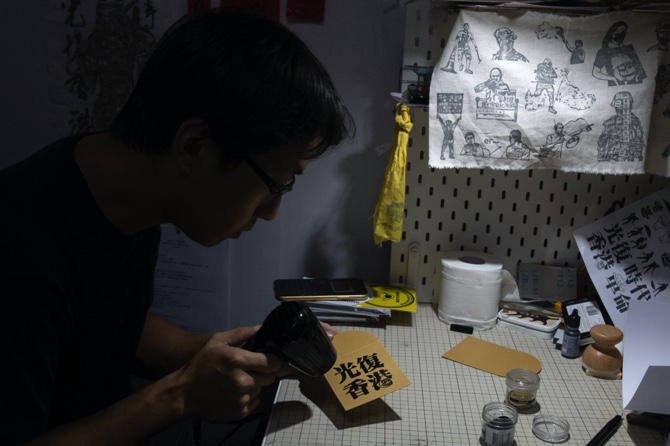 Every year, adults hand out red packets stuffed with cash to children and young, single adults. Messages printed on them generally convey wishes for prosperity and happiness, but artist Jason Kwan has designed rubber stamps for those who want to add a political message.

Kwan says stamping the packets can be therapeutic for those who have taken part in the protests and offer a sense of participation. Many of the printed messages were drawn from the protest movement, expressing a desire for greater democracy or an investigation into alleged police abuses.

“Although a rubber stamp can convey relatively little in terms of details and information, I think the rubber stamps could evoke the memories of the Hong Kongers who have gone through this,” Kwan said.

The Lunar New Year holiday is the most important on the Chinese calendar and falls on Saturday this year.

Hong Kong’s protests began in June to oppose proposed extradition legislation that would have allowed Hong Kong residents to be sent to stand trial in mainland China. The bill was withdrawn, but the demonstrations widened to other demands, fueled by a distrust of the Communist Party-ruled central government in Beijing.

Kwan has been incorporating protest themes into his work for some time. He said he hopes to use the stamps to record specific incidents and promote the movement’s goals.

Hong Kong was returned to China from British colonial rule in 1997 but was promised certain rights not afforded to the mainland. Many in Hong Kong believe those rights are being eroded by Beijing. AP