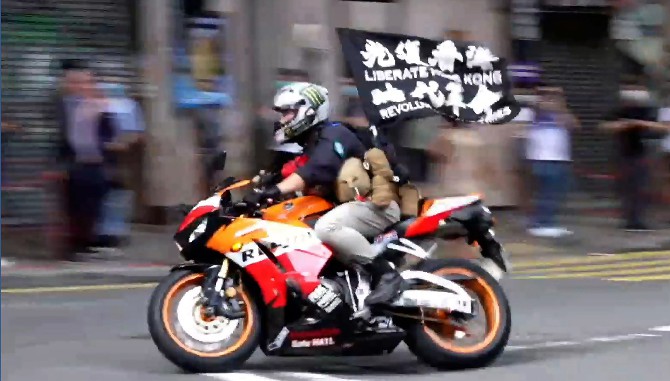 A pro-democracy protester was sentenced Friday to nine years in prison in the closely watched first prosecution under Hong Kong’s national security la.
Tong Ying-kit, 24, was convicted of inciting secession and terrorism for driving his motorcycle into a group of police officers at a July 1, 2020, rally. He carried a flag bearing the banned slogan, “Liberate Hong Kong, revolution of our times.”
President Xi Jinping’s government imposed the law on the former British colony last year following protests that erupted in mid-2019
Tong’s sentence was longer than the three years requested by the prosecution. He faced a possible maximum of life in prison.
Tong’s sentence is a “hammer blow to free speech” and shows the law is “a tool to instill terror” in government critics, Amnesty International’s Asia-Pacific regional director, Yamini Mishra, said in a statement.
The law “lacks any exemption for legitimate expression or protest,” Mishra said. “The judgment at no point considered Tong’s rights to freedom of expression and protest.”
The U.S. government, in a statement, criticized the “unjust outcome” of Tong’s trial and said the security law was used “as a political weapon to silence dissenting voices.” It said China is undermining rights guaranteed by Hong Kong’s mini-constitution, the Basic Law, and by the 1984 Chinese-British Joint Declaration on the territory’s return.
It called on Beijing to “stop targeting individuals exercising their rights and freedoms.”
Chinese officials reject the criticism and say Beijing is restoring order and instituting security protections like those of other countries. More than 100 people have been arrested under the security law.
Defense lawyers said Tong’s penalty should be light because the court hadn’t found the attack was deliberate, no one was injured and the secession-related offense qualified as minor under the law.
Tong nodded but said nothing after Judge Esther Toh announced the sentence for a three-judge panel in the Hong Kong High Court. The former restaurant waiter wore a black shirt and tie with a blue blazer as he had throughout his trial.
Tong was sentenced to eight years for incitement to secession and six and a half years for terrorism, with some time to be served concurrently for a total of nine years, said Toh, the judge.
Tong expressed remorse but that didn’t count toward reducing his sentence because he failed to plead guilty, the judges said in a written ruling. They said he had “good character” and no criminal record but due to the “serious offenses” those would not mitigate the penalty.
The sentence reflects “the abhorrence of society,” the ruling said. Katie Tam & Janice Lo, Hong Kong, MDT/AP

The Hong Kong Special Administrative Region (HKSAR) government on Saturday expressed regret as some officials of the U.S. State Department and the European Union (EU)’s office on foreign affairs and security policy made remarks on the conviction and sentencing by the High Court of the HKSAR against an offender under the national security law in Hong Kong.
The HKSAR government deeply regretted and rejected remarks by officials from the United States and the EU which were blatantly trampling on Hong Kong’s judicial strengths, let alone their usual politically motivated interference into the internal affairs of China’s HKSAR, a spokesman of the HKSAR government said.
Every country has a right to safeguard national security and take resolute actions against any offenses, the spokesman said, adding that officials in the United States and EU repeatedly smeared the national security law since its enactment, alleging that the legislation was being abused in Hong Kong without any evidence or substantiation.
Their unjustified stance on Hong Kong affairs clearly shows their arrogance and double standards, the spokesman said.
The national security law clearly stipulates four types of offenses endangering national security and the penalties and law-abiding people will not unwittingly fall foul of the law, the spokesman said.
The official added that after the implementation of the national security law, Hong Kong people’s rights and freedoms under the HKSAR Basic Law as well as the relevant provisions of International Covenant on Civil and Political Rights as applied to Hong Kong continue to be protected.
Among others, the media and the general public continue to exercise their right to monitor the government’s work and the freedom of criticizing policies, the spokesman said, noting that there is no basis for the officials in the United States and the EU to suggest that Hong Kong people’s rights and freedom have been undermined.
The spokesman urged the United States and EU authorities to respect the rule of law and refrain from making any attempt to influence Hong Kong’s courts in exercising their independent judicial power.
Such behaviors are detrimental to relationships with the HKSAR on a wide range of subjects of mutual concern and benefits, the spokesman said. MDT/Xinhua