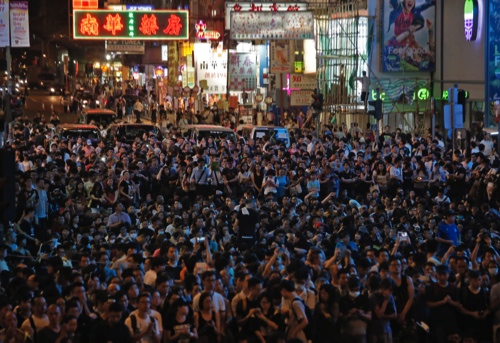 Protesters continued to block roads in central Hong Kong in the fifth day of pro-democracy demonstrations as leaders warned the standoff would escalate in the coming days if their demands aren’t met.
Crowds swelled to the tens of thousands last night as police largely kept their distance, avoiding the clashes of Sunday that seemed to fuel the demonstrations. By morning, enough people remained in the Admiralty district for key roads to stay blocked as workers commuted by foot and metro. The benchmark Hang Seng Index dipped again, marking its biggest two-day decline since February.
The movement, kick-started by students on Sept. 26, swelled following weekend clashes with riot police who used tear gas to disperse crowds. Student leaders last night said the protests would spread if their demands aren’t met for Chief Executive Leung Chun-ying to resign and for the government in Beijing to drop plans to control the 2017 leadership election. 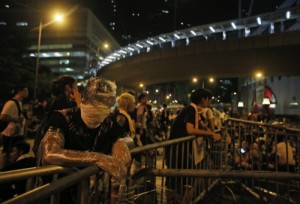 At a press conference Monday night, student leaders Joshua Wong, Lester Shum and Alex Chow, who were detained at the start of the protests and then released, called on Leung to respond to their demands by today or risk an escalation of the standoff.
When asked at a press conference yesterday whether he would resign, Leung said that “any personnel changes” would result in the existing election committee choosing his successor, rather than through a vote.
At the briefing, Leung dismissed speculation that the People’s Liberation Army, which was used to crush the 1989 Tiananmen Square demonstrations, would be used in Hong Kong. He also indicated that the city was preparing for the protests to last.
“The impact from Occupy Central would not be just three to five days – it could be quite long,” Leung said, citing the protesters’ road blocks, medical aid centers and supply stations.
The student’s deadline coincides with China’s National Day, when the country celebrates the founding of the Communist Party in 1949. Leung is due to mark the occasion at an 8 a.m. ceremony near where the main protests are being held. The popular firework show over Victoria Harbour for the holiday has been canceled. Thursday is also a holiday in Hong Kong, meaning turnout could swell with school and workplaces shut.
“It’s quite possible that at least more than 100,000, if not up to 300,000, 400,000 people, will join in the protest in a show of people’s power,” Willy Lam, adjunct professor at Chinese University of Hong Kong, said in an interview yesterday. “They want to convince the Hong Kong government and Beijing that any use of force will be counter-productive. It will only galvanize more of the rest of Hong Kong’s 7 million people.”
The demonstrations also coincide with Golden Week, a week-long holiday in China when hundreds of thousands of people from the mainland travel to Hong Kong. Some retailers are closing outlets, with Chow Tai Fook Jewellery Group Ltd., the world’s largest jewelry chain, shutting about 20 shops yesterday.
The protests – spurred by China’s decision last month that candidates for the 2017 leadership election must be vetted by a committee – pose the biggest challenge to China’s control of the city since British colonial rule ended in 1997.
At the time, the Chinese government pledged to maintain the city’s freedoms under its “one country, two systems” approach. China had endorsed the idea of holding elections in Hong Kong as far back as 1990 with the adoption of the city’s basic law, a type of constitution. As China’s influence has grown within the Hong Kong government, pro-democracy activists stepped up their fight for an open election when the city holds its first vote for chief executive in 2017.
The clashes with police this week were the city’s biggest since unrest in the 1960s led by pro-Communist groups inspired by Mao Zedong’s Cultural Revolution. Police arrested 89 people during the weekend demonstrations, a spokesman said.
U.K. Prime Minister David Cameron’s government said it was important for Hong Kong to preserve rights and freedoms for its people, including the right to demonstrate, according to an e-mailed statement from the Foreign Office. Taiwan President Ma Ying-jeou, whose government fled after losing China’s civil war, said he supports the Hong Kong people’s pursuit of democracy.
Hong Kong is part of China, and foreign governments should not interfere with its internal affairs, Foreign Ministry Spokeswoman Hua Chunying said Monday.
Across the border, Chinese state media have provided scant coverage of the protests beyond noting that an illegal gathering spun out of control and was being curtailed by police.
Last night thousands of demonstrators, many of the them students wearing black tee-shirts, were sitting down on Hong Kong’s Hennessy Road, which leads to the shopping district of Causeway Bay, to the east of the main protest area. In Mong Kok, on the other side of Victoria Harbour, thousands more protesters took up positions and sang songs in one of the city’s most bustling shopping districts.
Crowds cheered and made way for a convoy of three trucks and more than 10 motorbikes making food and water drops Monday night in Admiralty. Ada Chan, 26, a singer and music teacher, said she has slept on the street for the past two nights while still going to work in the day and won’t back down if Leung doesn’t respond to demands.
“I will just keep coming until I have a better answer,” she said. “Some people are calling for C.Y. to get out but to me, I want much more than that,” she said, referring to Leung by the initials he’s popularly known by.
School children in Causeway Bay sat passing round pastries, while one McDonald’s shop ran out of Coca-Cola and Big Macs as queues extended out of the door.
Anna Wong, 26, and her friends brought water, food and plastic wrap to protesters in Causeway Bay, two subway stops to the east, as protesters coordinated supplies using WhatsApp, Instagram and Facebook.
“I just want to support the Hong Kong people to fight for democracy and for what they deserve,” she said. Bloomberg

The White House is urging authorities in Hong Kong to show restraint with pro-democracy protesters.
White House press secretary Josh Earnest says the United States supports freedom of expression and peaceful assembly for the people of Hong Kong.
Police have used tear gas and other methods to try to control the demonstrations that have paralyzed the city’s financial district.
Earnest says the United States believes the legitimacy of the office will be enhanced if they are given a “genuine choice of candidates.” Earnest says Hong Kong needs an open society with the highest degree of autonomy.