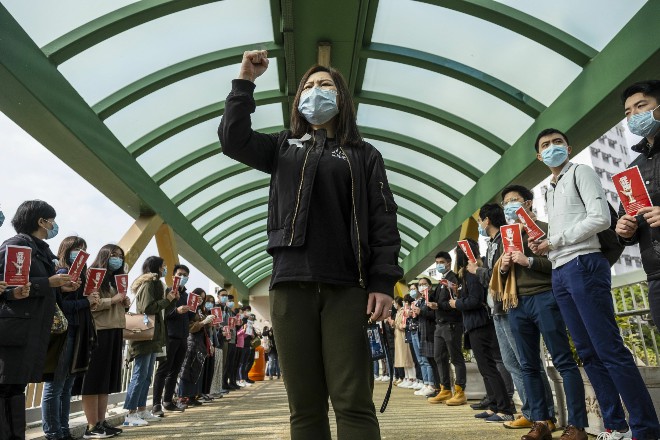 Thousands of Hong Kong medical workers went on strike for a second day yesterday to demand that leader Carrie Lam immediately close the city’s border with the mainland to prevent the spread of a deadly coronavirus.
Yet the strike also revealed a longer term threat to her administration, as well as to her bosses in Beijing: It shows the growing strength of pro-democracy unions formed in recent months by protesters who want to curb China’s influence on the financial hub. The strategy aims to allow pro-democracy groups to quickly organize mass actions and, ultimately, transform a political system designed to favor Beijing loyalists.
“Government opponents are going through strenuous efforts to form new trade unions, hoping this could increase their chances of winning more seats in the legislative council,” said Lau Siu-kai, the former head of a Hong Kong government think tank and an emeritus professor at the Chinese University of Hong Kong. “These efforts will go hand-in-hand with the protests, bolstering the political movement in Hong Kong to seek more detachment from mainland China.”
The Hospital Authority Employees Alliance, which was formed in December, says it’s already attracted more than 18,000 members – nearly a quarter of the staff at the Hong Kong Hospital Authority, the city’s second biggest employer. The group said about half of them planned to strike this week in a bid for stronger measures to stop a coronavirus outbreak that has killed more than 420 people including one in Hong Kong.
The union is among dozens that were formed recently by participants in pro-democracy protests that have rocked the city since last June. In the second half of 2019, the city’s labor department received 135 applications for new trade unions, spanning industries from finance to education and bartenders. That compares with only 10 during same period the previous year.
The rise of pro-democracy unions threatens the monopoly of pro-government unions that have an outsized influence on labor policy, and in elections for the city’s Legislative Council and chief executive. They could also potentially add to disruptions to the economy, which has slid into recession as protesters shut down transport networks, vandalized China-linked businesses and deterred tourists from visiting Hong Kong.

‘Hamstring some businesses’
“Hong Kong traditionally has not been a unionized place – if the unions were to get individuals together for collective demands it could hamstring some businesses,” said Benjamin Quinlan, chief executive officer and managing partner of Quinlan & Associates, a strategy consultancy based in Hong Kong. Hospitality, food and beverage, and medical businesses could be the first to suffer the impact, he said.
Hong Kong’s labor rules are a big attraction for foreign companies: The World Economic Forum’s competitiveness rankings last year put the city as the number one location for its hiring and firing practices among 141 economies. Yet in the category of “workers rights,” it came in at 114 on the list.
This week’s strike among medical workers, which was opposed by the government and drew criticism in some local newspapers, will test the ability of protesters to turn their street numbers into organized collective action.
“People are genuinely worried and even more reluctant to go outside now that they know there’s a risk of medical workers being on strike,” Quinlan said.

Not closing border
Lam, the city’s leader, said Monday it wasn’t acceptable that medical workers went on strike and most of those infected in Hong Kong were local residents. Hong Kongers now accounted for 90% of people passing through the border, she said, adding that banning mainland visitors wasn’t in line with the World Health Organization guidance.
“We must not encourage any discrimination so we have to exercise caution here,” Lam said.
The medical union is embarking on the second stage of its stike after talks with the government failed. It hopes to rally 9,000 members to take action and also protest in front of the city’s Hospital Authority.
Among 3,164 union members who took part in a vote on Saturday, nearly 99% of people favored going on strike unless the Hong Kong government barred all visitors entering from mainland and ensured an ample supply of masks. The city’s infected patients have risen to 15 as of Tuesday, while in China the number of confirmed cases jumped to more than 20,470.

Pet stores, accountants
“Our members have spiked because of the pneumonia outbreak,” Ivan Law, a registered nurse of more than three years and vice chairman of the Hospital Authority Employees Alliance, said in an interview. “On top of workspace issues, we hope the union can be a representative to speak out on political issues.”
The medical workers aren’t alone. Pet store workers, tech staff and accountants are also weighing measures to deal with the pneumonia outbreak.
The Hong Kong Alliance of Accounting Professionals is asking companies to halt business trips to China, according to an executive with the group who asked to be identified only by his last name Chan for fear of retribution by his employer. He appeared at a press briefing on Friday wearing a face mask and hat to avoid being recognized.
The formation of unions is also another step for Hong Kong protesters to have more say in the city’s carefully managed elections. They are seeking to erode the influence of pro-Beijing unions, including the Hong Kong Federation of Trade Unions, which command five seats on the Legislative Council.

Election impact
Hong Kong’s legislature comprises 70 members, half of whom are elected through five geographical districts under a proportional representation system, and the other half indirectly through 29 functional constituencies such as accountancy and textile. That means a small clutch of companies and industry professionals that tend to vote in favor of the pro-Beijing camp have just as much say as all the city’s 4.1 million registered voters.
The newly formed unions can apply to receive one vote for each union after being registered for a year. If enough unions are formed, they can potentially win more lawmaker seats for the pro-democracy camp, shifting the power dynamics in the city’s main lawmaking body.
“The government needs the functional constituencies because it would lose majority otherwise,” said Ma Ngok, associate professor at the Department of Government and Public Administration at The Chinese University of Hong Kong. “It has a large impact on the LegCo’s legitimacy and has prompted citizens to think that the council cannot effectively represent public opinion.” Josie Wong, Lulu Yilun Chen & Shawna Kwan, Bloomberg