Hong Kong | Virus puts protests on ice. Will they return? 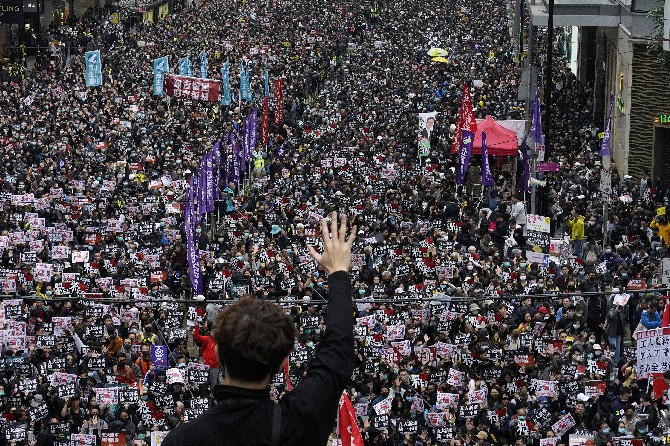 In this January 1, 2020 file photo, a protester shows a “five demands” gesture as Hong Kong people participate in an annual pro-democracy march

The crowd lining up recently on a cold, dark Hong Kong street wasn’t part of the anti-government protest movement that rocked the semi-autonomous Chinese territory for months.
Their demand: surgical masks, now in short supply as fears grow over a new virus that has claimed more than 1,000 lives across the border in mainland China and one in Hong Kong.
The city’s often-tumultuous street protests had already slowed over the past two months. Now they have ground to an almost complete halt as attention focuses on how to avoid a recurrence of the SARS pandemic, which killed about 300 people in Hong Kong in 2002-03.
But with most of the protest demands unmet, it’s too early to declare the movement dead.

RALLIES SHRINK
The frequency and ferocity of street protests eased after a landslide victory by the pro-democracy bloc in November’s district council elections. The vote was a sharp rebuke of Chief Executive Carrie Lam’s rule and ushered in a period of relative calm.
Hundreds of thousands of people packed streets on Dec. 8 for a peaceful march as they sought to press the government on demands for full democracy and an independent inquiry into alleged police brutality in suppressing earlier protests.
The protesters returned on Jan. 1 as they sought to maintain their momentum into 2020. The march degenerated into familiar violence, with police firing tear gas and a water cannon and black-clad protesters throwing gasoline bombs. More than 400 people were detained.
Occasional, smaller demonstrations have taken place since then, including lunch-time rallies by slogan-chanting office workers and vigils for a student who died during a protest.

FRUSTRATIONS LINGER
Anger still simmers against the government, and the wrath has been channeled against what is perceived as government mishandling of the virus outbreak.
Residents in several areas have staged angry protests against government plans to quarantine possibly infected people nearby. Thousands of hospital staff who are part of a newly formed medical union went on strike last week with calls for five demands, including full closure of the border with the mainland, and better protection for health care workers against the virus. A flight attendants’ union at Cathay Dragon, a sister company of Hong Kong’s main carrier, Cathay Pacific, has also threatened to strike unless all flights to mainland China are halted
Dixon Sing Ming, a political science professor at Hong Kong University of Science and Technology, said the protest movement has morphed into an engine for broader activism through new labor unions and the use of social media to boycott pro-government businesses. Reports say Labor Department records show 27 unions were formed in the month up to Feb. 6, compared with 23 in all of 2019.
After calls rose to close the border, the government suspended rail links and halved flights and later sealed all border checkpoints except for three. It then imposed a 14-day home quarantine for all arrivals from mainland China. Many in Hong Kong feel the measures came too late and weren’t strong enough.

TRIGGER POINTS
Protest organizer Ventus Lau said anger has only grown over Lam’s handling of the crisis, especially her refusal to block all mainland visitors. Many believe Lam was responding to pressure from the central Chinese government, and even some government supporters have joined the chorus of criticism.
The current crisis will press home the protest movement’s goal of political reforms and will “add fuel to the whole movement in the long term,” Lau said.
On the horizon lie potential trigger points that could stir people to return to the streets. The release of a report by a watchdog probe on police behavior during the protests due in January, but since delayed, could spark anger among those who say the body has limited powers.
A poster circulating on private Telegram internet messaging groups describes the current sentiment: “Fight the virus, but don’t forget our cause.” EILEEN NG, Bloomberg