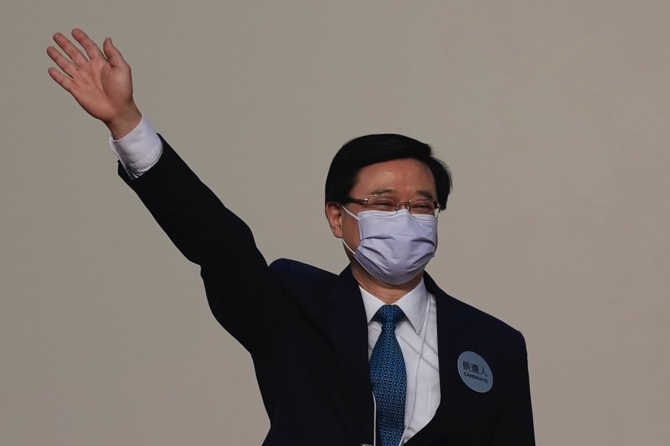 Hong Kong’s next leader John Lee yesterday received an official letter of appointment from Beijing, a month before he is due to take over the leadership reins of the semi-autonomous city.

Lee received his letter of appointment during a ceremony with Chinese Premier Li Keqiang yesterday, during which Li congratulated him on his appointment as Hong Kong’s next chief executive.

“The central government will, as always, fully and accurately implement the ‘one country, two systems’ framework, as well as the principles of Hong Kong people administering Hong Kong, and a high degree of autonomy,” Li said, referring to the framework under which Hong Kong is governed semi-autonomously and afforded certain freedoms not found in mainland China.

Li also expressed full support for Lee as the city’s next leader, and urged him to develop the economy as well as improve the livelihoods of people.

Lee responded that he was honored to become the next leader and will “do all that he can” to live up to the expectations of Beijing and the Hong Kong people.

“During this important time, on the 25th anniversary of Hong Kong’s return to China, I deeply understand the great responsibility I have,” said Lee, adding that he will lead the city “faithfully and steadfastly.”

Lee, who flew to Beijing Saturday for a four-day visit, won an uncontested election earlier this month, gaining over 99% of all votes cast by an election committee made up of largely pro-Beijing members.

Prior to winning the election, Lee was the city’s No. 2 official. He spent most of his civil service career in the police force and later in the security bureau.

Lee is known for his support of the city’s tough national security law, which outlaws subversion, secession, terrorism and foreign collusion to intervene in the city’s affairs. Over 150 people have been arrested under the law since it came into effect in June 2020.

His visit to Beijing to receive his letter of appointment is a routine one. Current chief executive Carrie Lam made a similar trip to Beijing in 2017 when she was elected.

Lee is expected to be sworn in as Hong Kong’s new chief executive on July 1, the 25th anniversary of Hong Kong’s return to China. ZEN SOO, HONG KONG, MDT/AP