IFFAM – Mary Queen of Scots | A tale of intrigue and sisterhood 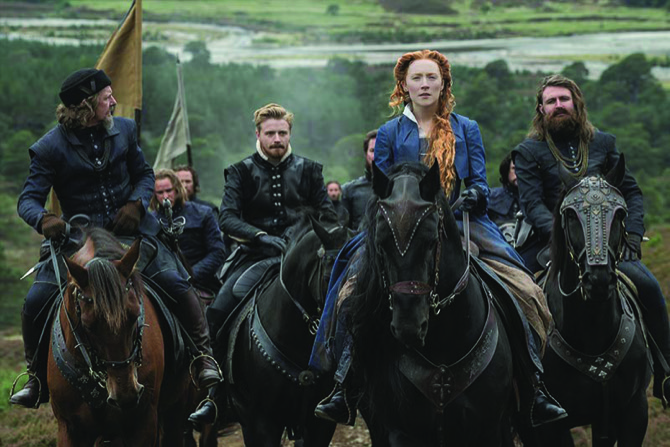 In “Mary Queen of Scots” two 16th-century queens compete for influence as an English succession crisis begins to unfold. A tale of political intrigue, the cousin-queens of Scotland and England might be polar opposites by character, but both must navigate the treacherous political landscapes of their own countries with a similar (and justified) distrust for nearly every man around them.

The film was screened on Tuesday night under the Special Presentations segment of the 3rd International Film Festival and Awards Macao and was well-received by the audience, prompting the occasional laugh and an applause at its credits.

Saoirse Ronan delivers an ambitious Queen Mary of Scotland, determined to shore up her legitimacy at home while insisting on her rightful claim (as the granddaughter of Henry VIII’s elder sister, Margaret) to the English crown.

On the other end of the island, Elizabeth I of England (Margot Robbie) is secure on her throne but crippled physically by disease and emotionally through self-doubt and jealousy for a younger, prettier and more legitimate rival.

Told from the perspective of Mary, the depiction of Elizabeth is unflattering.

The film casts an unfavorable light on Elizabeth’s famous reluctance to marry, insinuating that she had little choice in the matter on account of being unattractive, unwanted and barren, and that she harbored a great resentment over the birth of Mary’s son James, who would go on to inherit both kingdoms.

The film chronicles a series of betrayals against the Scottish queen, eventually forcing her to abdicate in favor of her child heir.

Mary flees across the border and requests English intervention to restore her to the throne of Scotland. But Elizabeth refuses, offering only protection on the condition that Mary never tries to undermine her sovereignty. The rest is history.

In the most thrilling scene of the movie – an ahistorical confrontation between the two ‘sister’-queens – a deposed yet fiery and indignant Mary insists on her superior claim: “If you murder me, remember you murder your sister, and you murder your queen.” “I will not be scolded by my inferior,” she warns Elizabeth.

Mary’s character is only weakened by director Josie Rourke’s insistence on portraying the young queen as a modern progressive and tying the narrative to current events. In one scene, Mary forgives a homosexual courtesan (Ismael Cruz Cordova) after he is caught sleeping with her husband (Jack Lowden), telling him “you have not betrayed your nature,” and welcoming the courtesan back into her entourage.

Though at times beautifully cinematic and immersive, “Mary Queen of Scots” is dominated by a dull and prolonged build- up where even the political intrigue of Mary and her barons passes without excitement. Audiences expecting thrills from one of history’s greatest rivalries will be left wanting, as Elizabeth is given almost no screen time to come into her own.