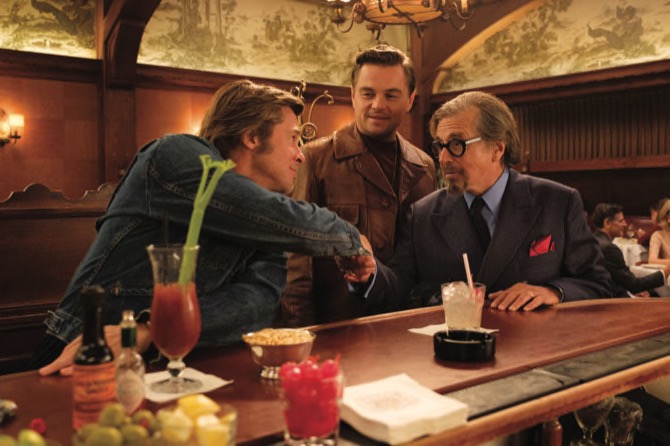 From left: Brad Pitt, Leonardo DiCaprio and Al Pacino in Quentin Tarantino’s “Once Upon a Time in Hollywood”

He’s made an old-fashioned double-feature (“Death Proof,” of “Grindhouse”), resurrected the wide-screen format of 70mm Ultra Panavision (“The Hateful Eight”) and generally presided as the pre-eminent B-movie evangelist for a generation. The power and thrill of exploitation movies, he has earnestly espoused, can conquer all evils — or at least slavery (“Django Unchained”) and the Nazis (“Inglourious Basterds”).

But “Once Upon a Time … in Hollywood,” set in 1969 Los Angeles, is Tarantino’s most affectionate and poignant ode yet to the movie business. It’s a breezy, woozy Hollywood fable that luxuriates in the simple pleasures of the movies and the colorful swirl of the Dream Factory’s backlot. Some pleasures are nostalgic, and some — like driving down Sunset Boulevard or martinis at Musso & Frank — are everlasting.

Here, movie love feels contagious, like something in the air. In one of the film’s best scenes, Margot Robbie’s Sharon Tate explains at a theater’s ticket office that she’s in the movie, the newly released caper “The Wrecking Crew,” (“I’m the klutz!” she says cheerfully). Inside, she giggles with delight at seeing herself on the big screen, giddily mimicking her character’s martial-arts moves and watching to see if the audience laughs at one of her lines. (They do.)

The pleasures in “Once Upon a Time” are also ours. Tarantino, has lowered his typically feverish temperature to a warming simmer, bathing us in the golden California light and the movie-star glow of his leading men, Leonardo DiCaprio and Brad Pitt. They spend copious amounts of time driving through the Hollywood Hills in a creamy Coupe de Ville, riding along like Butch and Sundance and just as nice to look at.

DiCaprio is Rick Dalton, a Burt Reynolds-type actor of TV Westerns (his claim to fame is the ‘50s hit “Bounty Law”) whose career is stalling. Pitt is Cliff Booth, his stunt double and best friend, a war veteran with a bad reputation but a friendly, relaxed manner. They have a natural, easy rapport, with Booth doubling as a drinking buddy and support system for Dalton, who’s increasingly anxious about his typecast future. (Al Pacino, as his agent, urges him to head to Italy for a spaghetti Western.)

In DiCaprio’s finest sequence, he chats between takes on a Western called “Lancer” with a frightfully serious Method Acting 8-year-old co-star (Julia Butters) before forgetting his lines. After a bout of self-loathing in his trailer, he returns and nails the scene. DiCaprio, a preternaturally self-possessed actor himself, captures the whole arc beautifully.

When word got out that Tarantino’s latest film would take place around the Manson murders, it was easy to wonder what genre mayhem the director would bring to this epochal moment. We know what carnage resulted when Zed was dead, so what did Tarantino have in store for the demise of the ‘60s?

It’s not that “Once Upon a Time … in Hollywood” doesn’t revolve around that grisly tragedy. It looms always in the background, and eventually in the foreground, too, after Booth picks up a hitchhiker (Margaret Qualley) who leads him to the Manson compound at Spahn Ranch, the former production site of TV and film Westerns where Manson’s mostly female acolytes emerge and Booth goes to check on the owner, an old friend, George Spahn (Bruce Dern). Dalton and Booth are fictional concoctions surrounded by real people, including their neighbors: Tate and her husband, Roman Polanski (Rafal Zawierucha).

By the film’s climax, blood will spill and movie-made historical revisionism will have its day. But I suspect a lot of Tarantino fans will be taken by surprise at the film’s leisurely pace, set more to a (and this a good thing) “Jackie Brown” speed. As in that film, Tarantino isn’t purely living in an over-the-top movie fantasy world, but one teetering intriguingly between dream and reality. The dialogue and action has slowed down enough to allow a little wistfulness and melancholy to creep in.

At times, his path is a little wayward and prone to digressions. Tarantino feels perilously close to simply turning his movie into several of Dalton’s, so eager is he (like the Coens were in “Hail, Caesar!”) to lovingly adopt those period styles. But usually, the detours are hard to resist. In one, Booth ends up in a fight with Bruce Lee (Mike Moh) on the set of “The Green Hornet.”

And if you’re going to make a movie that celebrates what’s grand about Hollywood, it helps to have Brad Pitt in it. The chemistry between him and DiCaprio, together for the first time, is a delight; I would gladly watch them drive around lacquered, golden-hour Los Angeles, with cinematographer Robert Richardson trailing them, for longer than the already lengthy running time of “Once Upon a Time … in Hollywood.”

Pitt, in particular, appears so utterly self-possessed. It’s a swaggering grade-A movie star performance in a movie that celebrates all that movie stars can accomplish — which, for Tarantino, is anything. That the youthful, exuberant Tate was robbed of that potential is one of the wrongs Tarantino is righting here. But his fairy tale also swells with an even larger and optimistic vision. For today’s doomsayers of movies, which are seen by some as a less potent art form, “Once Upon a Time … in Hollywood” imagines an apocalypse denied. Tate, and the movies, will live forever. Jake Coyle, AP Film Writer

“Once Upon a Time … in Hollywood,” a Sony Pictures release, is rated R by the Motion Picture Association of America for language throughout, some strong graphic violence, drug use, and sexual references. Running time: 161 minutes.