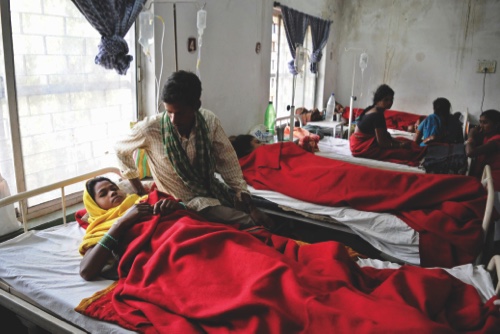 Indian women who underwent sterilization surgeries receive treatment at the District Hospital in Bilaspur, in the central Indian state of Chhattisgarh

The doctor who conducted sterilization procedures after which 13 women died in central India was arrested, but insisted he didn’t do anything wrong — even though he said he used to perform up to 10 times more surgeries a day than allowed.
Dr. R.K. Gupta, who had been hiding since Saturday’s operations, was arrested at a relative’s home near Bilaspur city late Wednesday, said Dr. S.K. Mandal, the chief medical officer of Chhattisgarh state.
Gupta denied responsibility for the deaths and blamed medication given to the women after the surgery.
A total of 83 women had the surgeries as part of a free government-run mass sterilization campaign and were sent home that evening. But dozens became ill and were rushed in ambulances to private hospitals in Bilaspur.
Mandal said at least 13 women died and dozens more were hospitalized, including at least 16 fighting for their lives.
Gupta had performed over 80 sterilization surgeries in six hours — a clear breach of government protocol, which prohibits surgeons from performing more than 30 sterilizations in a day, Mandal said. He said that investigators were also trying to determine whether the women, all of them poor villagers, had been given tainted medicines.
“I am not guilty. I have been performing surgeries for a long time and there has never been any problem,” Gupta told reporters in Bilaspur around the time of his arrest.
“I have a history of completing up to 200-300 surgeries in one day,” he said, adding: “There are no written guidelines, but what we have been told verbally is that we shouldn’t perform more than 30 operations in a day.”
He said that all the patients began throwing up and complaining of dizziness and weakness after they were given medication following the operations.
Experts say the deaths are the result of a complete lack of medical oversight and the fact that the government inIndia sets sterilization targets as part of its efforts to stabilize India›s booming population.
In the 1970s, Prime Minister Indira Gandhi imposed a policy of forcibly sterilizing men who had already fathered two children. Opponents at the time said the program targeted unmarried and poor men, with doctors given bonuses for operating on low-
income patients.
India’s government had said it stopped setting targets for sterilizing women in the 1990s. But doctors and human rights workers have alleged for years that targets exist — which would lead to inevitable coercion in villages where most people have very limited access to both education and health care.
Mandal has said earlier that Gupta was likely under pressure to achieve his district’s target of about 15,000 sterilizations.
In January, Gupta was feted by the state government for performing 50,000 laparoscopic tubectomies. Muneeza Naqvi, New Delhi , AP